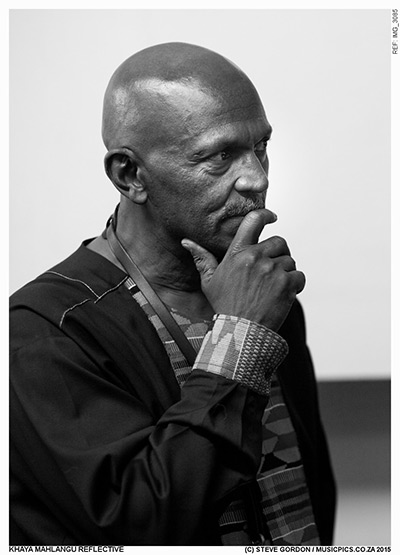 Khaya Mahlangu was born 1954 in Soweto, Johannesburg. Influenced by his father´s music collection of local and international artists, he played the bugle in the Boys Scouts and later picked up the trumpet under Phineas Molefe Phetho in a program for township youth run by Professor Khabi Mngoma. This was in 1971.

In 1972 he joined a high school band and later switched to Saxophone, which was given to him by an uncle, Monde Hashe. In 1975, he joined a band called Harari, led by another uncle, Selby Fikile Ntuli, a keyboard player. In 1976 he joined a resident band of the only nite club in Soweto, The Pelican.

In 1977 he decided to study at the University of Zululand under Professor Khabi Mngoma until 1979.

1980 was to be one of the most important career highlights. He joined a prolific band called Spirits Rejoice led by tenor great Duku Makasi. The following year he founded a band with Sipho Gumede called Sakhile and recorded four albums, and which toured Europe and Southern Africa extensively. The mid 1980’s saw Khaya releasing his debut solo album (1986) ‘To you, my dear’, and he was also active on the festival circuit, his distinctive tenor underpinning afropop artists such as Sipho ‘Hotstix’ Mabuse. In 1990 Sakhile performed at Wembley stadium in London for Nelson Mandela, the festival featured performers including George Duke and Anita Baker.

In 1992 he did several milestone concerts with pianist Abdullah Ibrahim, which included work with the National Symphony orchestra. The following year he joined Hugh Masekela’s Band for a tour of USA, where they recorded “Hope” at the Blues Alley in Washington. He continued international touring work with Hugh in 1994, working with Hugh Masekela and Miriam Makeba in North America and Europe.

Mahlangu is a top-league session artist, freelancing with various artists like Vusi Khumalo, Moses Molelekwa, Caiphus Semenya, Letta Mbulu, Jonas Gwangwa and guested on many recordings. He formed a band called Iconoclast with Victor Ntoni, Hilton Schilder and Vusi Khumalo. 2001 was also important. “Bejazzled” a jazz TV program offered a chance for Khaya to do TV work as Musical Director and he also composed the signature tune. It ran for 13 weeks.

In 2002 Khaya did a lot of work with Jonas Gwangwa and Hugh Masekela. Arranged, played and produced “Time” by Hugh Masekela, “New Dawn” by Tsepo Tshola and Busi Mhlongo’s still-to-be- released CD, for Chissa Records owned by Bra Hugh.