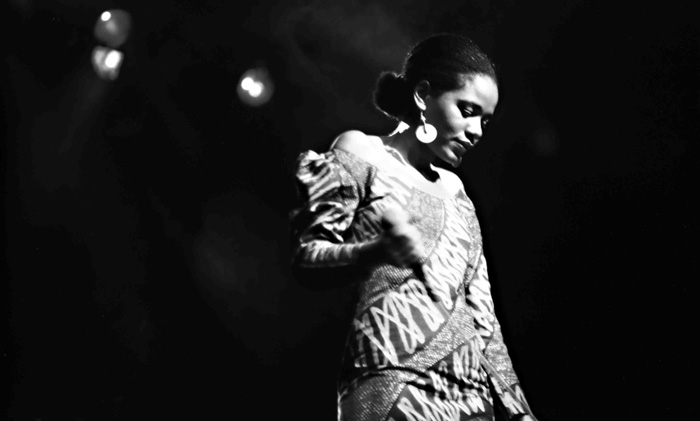 Zenzi Lee was born in Manhattan, New York, to a South African mother and an American father. Born in two different cultures, music has become central to her being, transcending geographical confines.

Her first documented stage appearance was at the age of eight in Den Hague at the Northsea Jazz Festival. The same year, Zenzi had a role in Moroccan born film director,
Ben Barka’s award-winning anti-apartheid film shot on location in Morocco and Conakry, Guinea.

At the age of thirteen, Zenzi was featured in a televised concert in Spain.

She eventually graduated to backing vocalist for her grandmother the late Miriam Makeba, Hugh Masekela and the late Dizzy Gillespie on the “Live the Future Tour”, which went throughout Europe and the United States of America. She was also featured as a solo vocalist on the “Live the Future Tour” to sing a traditional Congolese song entitled “Milele”.

After the “Live the Future Tour”, Zenzi enrolled at the Manhattan School of Music in New York City, where she majored in composition and vocals.

Zenzi sang as a backing vocalist on the Miriam Makeba and Hugh Masekela “Tour of Hope” throughout Africa and Worldwide. Once again she was featured to sing a solo, an a cappella song entitled “Mama” (a traditional Jewish song originally entitled “Yiddisha Momme”, which she always dedicates to her late mother, grandmother and to all the mothers of the world).

French Director, Veronique Patte, produced a documentary based on Zenzi entitled “Mama”. The documentary was nominated “Best Documentary” at the film festival in France.

Zenzi released her first single entitled “State of Attraction”, which was a preamble to her debut entitled “Daynights” (Universal Music, NLL Records Ltd.).

In March 2000, Zenzi was nominated in the category “Best Female Artist” at the South African Music Awards (SAMA).

Zenzi has always composed and written her own songs. Over the years, she has also written and co-written numerous songs for other Artists, such as “Homeland”, a song on Miriam Makeba’s Grammy Award nominated album entitled “Homeland”.

Zenzi will be releasing her next album entitled “Wipe Your Tears”, which comprises mainly of original compositions with arrangements that feature traditional South African harmonies, including modern Jazz harmonies and a touch of Soul grooves and melodies.

In 2011, she featured in a recent Documentary /Film entitled “Mama Africa” realized in collaboration by a South African film company Millennium Films, a German company StarhausProduktion and Finnish company Marianna Films in cooperation with the Miriam Makeba Foundation; made in honor of the life, times and music of the late Dr. Miriam Makeba. At present, this film is being screened at numerous film festivals globally. It’s World Premiere debut screening took place in February 2011 at the Berlindale Film Festival, Germany; where it received an award for popular demand. It also screened in July of 2011, at the Durban International Film Festival.