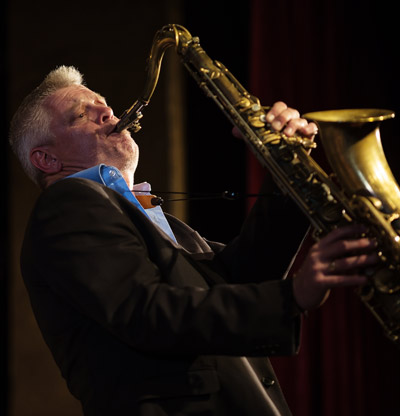 Yusuf Justin Holcroft ranks as one of the top saxophonists in South Africa. Since arriving in 2004, he has established himself on the session and performance scene, working with artists as diverse as Miriam Makeba, Freshlyground, TKZee, Gang of Instrumentals, the Bala Brothers and Dave Stewart. He is currently a regular member of En Fuego and Swing City, plays lead alto in the Orbit Big Band, and is prolifically involved in the corporate music scene.

His passion, however, is for jazz of the 50’s and 60’s. Stylistically he is influenced by Dexter Gordon, Ronnie Scott and Tubby Hayes, but encompasses both earlier and later exponents. Most importantly, his playing is committed, passionate and uncompromising.

His group brings together like-minded musicians who are all at the top of the musical tree in South Africa. Repertoire is taken from the greats – Miles, Monk, Coltrane, Gordon et al – to which the group’s feel and communication is added to generate tangible electricity on stage.