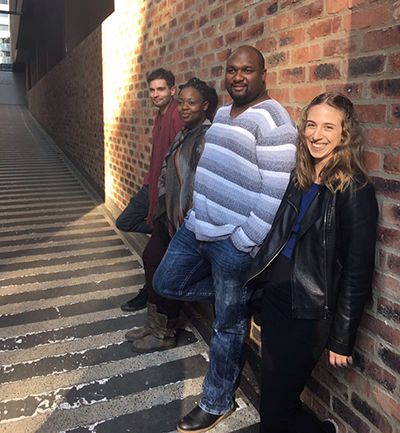 A collective of young and vibrant friends and fellow postgraduate music scholars at the WITS School of Arts in Johannesburg, South Africa. The quartet has mutual interest in paying homage to iconic South African Jazz artists while incorporating those influences into their own compositional voices. In the next month of August 2018, they will be performing this same project as part of a cultural exchange at the Oslo Jazz Festival in Norway.

Mdu Mtshali (39) an accomplished pianist, composer and arranger. Mtshali has performed with South African jazz giants such as Hugh Masekela, Khaya Mahlangu and Sibongile Khumalo. He has written and produced various albums for a number of noteworthy South African musicians.

Nick Bjorkman (25). Drummer and sound engineer. Bjorkman was introduced to music at a tender age and began his musical journey with classical piano. He was later drawn to the drums and taught himself himself how to play. Being self taught lead to his acceptance into the WITS school of arts. He is currently one of the top performing students in the institution.

Tal Gordon (21) a trumpeter who has had a love for Music as an art form, since she can remember. She started playing trumpet in high school and went to study jazz at WITS in 2015. She is a part of the Johannesburg National Youth Jazz orchestra and has played with notable South African artist Simphiwe Dana