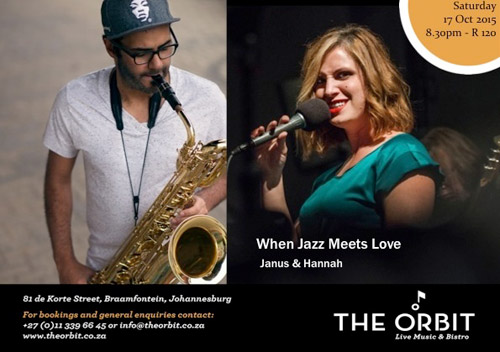 Firstly, we have Mthunzi Mvubu who started playing music at the age of 14 under the mentorship of Dr Jonny Mekoa at the Music Academy of Gauteng. His first instrument of choice was the piano but he later changed to the alto saxophone. He has played with Themba Mkhize, The Temptations (USA), and The OJ’s (USA), Herbie Tsoaeli , Victor Ntoni , Musa Manzini to name a few.
Accompanied by his Fiancé MoAfrika ‘a Mokgathi Poetess/Singer/Saxophonist –flutist (sometimes)/Award winning Radio Presenter and content Producer /recently TV Presenter and content Producer/Event Organizer. Known for her Sepedi pen and her unique reciting style using Code mixing and code switching. She Studied jazz music at CAFCA Music school in Mamelodi at age 19. She has been performing Poetry for the past 9 years alongside great writers of her time like David wa Maahlamela, Natalia Molebatsi, and MaK Manaka to name a few.

Janus represented South Africa at the 2009 and 2011 Standard Bank National Youth Jazz festivals, touring the country and performing to sold-out audiences. In 2012 he was selected as the multi-reed instrumentalist for the critically acclaimed musical mega show, Dirty Dancing. Janus served a one year residency for the Bowls Club Big Band, a 17-piece jazz ensemble that performs weekly at one of Johannesburg’s hottest performance venues, playing music ranging from traditional American Big Band to contemporary favorites. He was also the musical director of The Orbit Big Band for 16 months.
He will be joined by his wife Hannah Foster a formidably talented songwriter, vocalist and performer. Hannah graduated with a distinction from the Tshwane University of Technology in 2009 and has been performing for the past 5 years around the country. She has recently released her EP called “Ode to Time “ which is available on iTunes and she is working as a vocalist in Johannesburg.

Lastly, we have Nono Nkoane, a Jazz singer and Composer from Kwa-Langa, Cape Town. Born to a family with a very rich history in music, she was bound to find her immersed in the music world. True call … her debut album is a 10 tract jazz offering packed with hit songs such as Baleka, Ndalila, My journey, Voice from the past , Meditative state and many more. Nono left cape Town at the age 19 to seek further training in music. Nono was given an opportunity by her long time mentor Dizu Plaatjies. His deep rooted African Music was a huge influence on Nono and it played a critical role in shaping her skills as a vocalist.

Nono’s exposure to jazz music was to be found at tertiary. Nono studied at the Tshwane University of Technology. She studied jazz contemporary music .Her studies in this field helped transform her into a composer and singer with a depth of that is unmatched .

She will be joined by her husband Bonolo “Scorpion “ Nkoane on drums. Bonolo is a founder member of a band called “4 Seasons”, and now working with Sibusile Xaba on the unlearning. He has worked with the great Herbie Tsoaeli and Benjamin Jephta and many more. He is working full time as a drummer for the South African Military