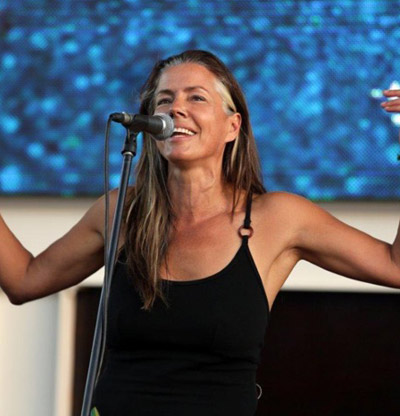 Born in Cape Town in 1964, Wendy first made a name for herself performing the hit This Boy with rock outfit The Sweatband in the early eighties. After much success with songs like Tonight, Shape of Her Body, This Boy and years of touring and performing, she left the group to start her solo career.
Her first solo album Beautiful World set the wheels in motion for a succession of hits, including Real World, Acid Rain, Miracle and Don’t Stop Believing. Wendy’s vocal performance on the album won her the Octave Award (1992) for Best Female Vocalist and a nomination for Song of the Year (Miracle).
In the late 90s Wendy released a string of notable albums including Ruby (19996, Duwayo (1998) and On a Pale Blue Dot (1999) which won the FNB Pop Album of the Year Award
Wendy joined world music group Mondetta with Steve Newman, Julia Kim, Gito Baloi and Elad Neeman. They released their debut album Small World, and performed to packed houses at venues around South Africa.
Wendy completed and released her fifth solo album Holy Water toward the end of 2002 which earned her a nomination for a South African Music Award for Best Adult Contemporary.
In 2012 Wendy decided to re-enter the performing arena and independently financed her next solo album: Supernova – produced by Robin Auld. A collection of unique, Wendy Oldfield style songs, stories about her life and personal experience – including the haunting and mesmerizing ballad, Burden – which she was asked to perform at the Edinburgh Music Festival in 2013.
Wendy’s main focus now is to get back on stage with nearly 120 shows a year, reclaim her audience and embrace her legacy as a modern day troubadour. Wendy’s back and better than ever!