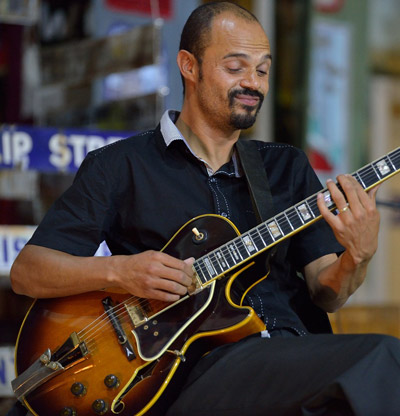 Wayne Bosch is firmly positioned among a list of A-rate guitarists in Mother City. Several musical influences have marked his evolution as a player, from classic guitar
language laid down by Wes Montgomery, to the ,ore modern styles explored by the likes of Charlie hunter, Pat Martino, Martin Tayler and finger style whizz Tuck Andress.

Equipped with an evolved mental approach to his playing and his role as a musician
has been a student of his instrument and musical styles since the early 90s, formally studying music at the renowed MAPP(Music Action for People’s Progress where His peers included Musa Manzini, Greg Pinto and Nhlanhla Magagula, before Embarking on jazz studies at UCT where graduated with an Honours Performance Degree in Jazz. At UCT his peers included the likes of Selaelo Selota, Jimmy Dludlu, Buddy Wells, Marcus Wyatt, Kevisan Naidoo, Sylvester Masinyane, Judith Sephuma and Andre Petersen.

Bosch hit the professional bandstand in 1996 with pianist and Bill Evans disciple Gerry Spencer who, along with local legend Alvin Dyers, has made enduring contributions to the Bosch’s musical development. Exposed to international audiences from 1997 while traversing in the Indian Ocean with Spencer and Judith Sephuma on the cruise liner The Symphony, Bosch has since gigged and/or studied with the cream of Cape Town , talent including Basil Moses, Ezra Ngcukana, Ester Miller, Robbie Jansen, Mark Fransman, Mike Campbell And Daryl Andrews. He is noted for his work with vocalists such as French ace Deborah Tanguy, San Francisco Singer Opie Bellas and local star Emily Bruce. He was in a line up of top-flight SA talents for a series Olympic Village gigs at the Athens Olympics Games in 2004.

Stylistically he is most active in jazz, comfortable in any ensemble including duo , trio, up to big band format, being able to slip with ease into Afro Jazz, pop, R&B or Gospel. He has lead numerous ensembles of his own including a project exploring odd metre playing with lead jazz percussionist Clement Benny. Bosch is a sought after teacher, having taught professionally
since 1998 at The Jazz Workshop and community based programmes The Little Giants, Prompt & Tomecy, in addition to private teaching. He passionately pursues youth music development and continues to lead efforts to establish and develop music among impoverished communities in Cape Town.

He later modulated from informal to formal tutoring where he taught at three high schools from 2006-2012 and was also part of the artist residence programme of the Western Cape Department of Education, and is a key role player in the education at the Arts and Culture Focus Schools in the Western Cape. Bosch is also regular clinician who has worked for the South Atlantic Jazz Conference.

He won acclaim in 2000 Old Mutual Jazz Encounters Competition and is a favorite among his peers and the regular jazz public. Bosch performances at the Cape Town International Jazz Festival in a Collaborative performance consisting of Professors and Lecturers from the Prestige Berklee University, and UCT lecturers and graduates under the title The Bebop Guitars (an ensemble of 5 guitarists) under the leadership of Prof. John Baboian.

Wayne Bosch relocated to Pretoria in 2013 to become the Music Manager at the Tshwane School Of Music (TSOM), based in Eersterust, where ground breaking work is spearheaded alongside Freddy and Beth Arendse within the community. September 2013 Bosch’s band was the opening act for Johnathan Butler at his concert in Gauteng.2014 Bosch registered at the University Of Pretoria to pursue studies of Masters in Music. Wayne Bosch’ latest achievement in 2015 was Music Director for the SA and American collaboration where he performed with the legendary drummer Bill Maxwell, band leader and drummer of the famous American band Kononia, and Trumpeter Fletch Wiley.