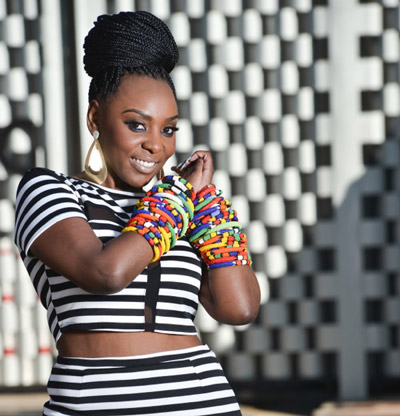 Wanda Baloyi is back in the musical spotlight with a new album after a three-year hiatus. Titled Love and Life, the project marks a new creative approach for Wanda. For the first time in her career, she has enlisted the talents of another creative to put pen to her entire lyric.
The experiment involves 10 days of elaborate sharing and learning with singer song writer, Kabomo to craft all the words that make up the Love and Life. The result resulted is a luscious blend of Soul, R&B and hip-hop. Wanda has managed to create a delicate balance of youthful verve and mature resolve with her new songs. About the song titled Awake she says, “it’s a song about an old relationship that is trapped in an emotional coma of sorts. Then out of nowhere, someone else comes along in a dream and helps you discover the possibility of what love could be. This third person helps to revive the magic of love. But in the end you wake up and reality strikes.” “Bitter Sweet” is a song that explores the sweet taboo and promise of a love triangle. “It’s a song about what happens when you meet some and you think, I like you, you carry the qualities I like in a man, but I can’t have you,” says Wanda about the song.

The album features a rich host of notable collaborations that help to tell Wanda’s beautiful tales of Love and Life. Judith Siphuma shares singing credits on “Kisses.” She lends her experience to the song and shores Wanda up as a talent not to be taken lightly. Wanda has also invited an up and coming talent on the hip-hop scene, Solo who raps on “Mirrored,” a song produced by Clint Brink. “This is a song about selfforgiveness.

It’s about accepting my mistake. It’s about giving myself a mirror to face myself and deal with myself.” Kabomo joins her for a duet on ” Ukuzimisela” a lovely ballad sung in isiZulu. The track unfolds like a delicate dialogue of a couple in the raptures of love. Wanda started her musical journey as a member of the all girl group, Ghetto-Luv in the 1990s. She would later recreate herself as a solo vocalist. She released her first album produced by award winning jazz guitarist Jimmy Dludlu, “Voices” in 2003. She followed it up in 2005 with “So Amazing”. “Voices” earned her a KORA Award for Best African Arrangement 2004 along with two SAMA nominations and a Channel O music video nomination 2005 and 2006. These accolades opened up doors that saw her work with the creatives as diverse as Moreira Chonguiça and Thembi Seete among many others.

In 2009 Wanda released her third project with Universal Music, a jazz and fusion album titled Colours. The release was followed by a three-year hiatus out of which the new album Love & Life, was created.