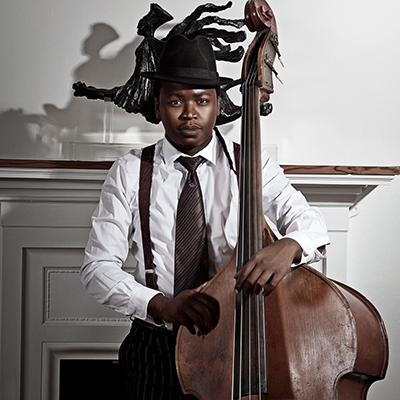 An endorsee of Yamaha Global Music SA, Viwe Mkizwana hails from the Eastern Cape. He began playing Classical Double Bass at the East Rand School of the Arts at the age of seventeen. In 2008, Mkizwana’s love of music led him to the Tshwane University of Technology, where he successfully obtained his National Diploma in Jazz and Popular Music in 2011. He completed his Bachelor of Music Honours degree at the University of Pretoria in 2016.

Mkizwana studied under Marike Prins and Professor Mark Duby, and has received masterclasses with Leon Bosch (London). His passion for music has taken him around the country and the world; he was privileged to perform with the MIAGI Orchestra in Amsterdam (The Royal Concertgebouw), Germany (Berlin Philharmonia) and Sweden (King’s Castle). Through his travels he has had the opportunity to play alongside celebrated musicians such as Rodolfo Maderos of Argentina, Gilberto Gil of Brazil, Anders Paulson of Sweden and Camille Favre-Bulle of France, Grammy award nominee, John Fresk, and Grammy award winner, Wouter Kellerman.

In 2014 Mkizwana formed the successful Mkizwana Ensemble. The band performs a variety of African- and jazz-influenced original compositions by Mkizwana. The ensemble released their debut album African Skies on 23 July 2016 to critical acclaim. The ensemble has performed at the Moretele Jazz Festival, Standard Bank Joy of Jazz, UNISA, University of Pretoria, The Orbit, State Theatre Jazz nights, and featured on Mzansi Magic Downtown jazz sessions, among others. The Mkizwana Ensemble continues to receive positive publicity and was invited to play at the SABC News Room on International Jazz Day and national radio stations such as Power FM, Radio 2000, Metro FM, Kaya FM, and SA Fm.

Mkizwana is currently a bass teacher and orchestral sectional instructor at Pretoria High School for Girls and the UNISA Music Foundation. He has an immense passion for developing young learners through music education, especially those from disadvantaged communities. More recently, Mkizwana served as the bassist for the internationally acclaimed theater production of The Color Purple and is set two tour Europe later this year.