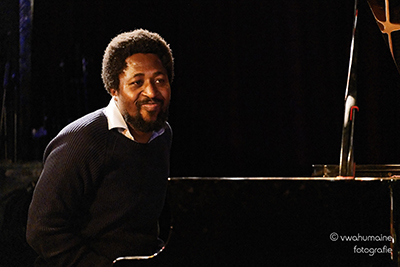 Victor Dey Jr. (1980) started his piano career at a young age. Being a son of a Ghanaian diplomat he grew up in the UK, Algeria, and later in Ghana. Originally classically schooled, he discovered jazz music in his student years.

After his Bachelors in Psychology and English at the University of Ghana, he chose a professional musical career. Since then he has pursued jazz studies from a variety of sources &a teachers, including a stint at the Berklee College of Music (USA) in 2006 and was awarded the title “Musician of the Year 2014” at the Vodafone Music Awards in Ghana. Victor has performed in Belgium, Benin, Burkina Faso, Ghana, Ivory Coast, Liberia, Sierra Leone, The Netherlands, Qatar, United Arab Emirates and the USA.

At the moment Victor has his own jazz quartet which performs regularly in Ghana and abroad. His home base is +233 Jazz Bar & Grill in Accra Ghana.  His debut album “Makola” with solely original music, was launched in July 2017.

Typical for his style is an exciting mixture of traditional Ghanaian rhythms and modern jazz. Recognising his unique style, CNN featured him in the program African Voices in August 2016.