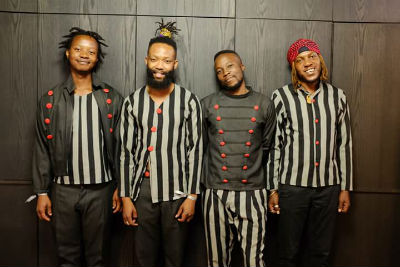 Born in Mzimhlope, Orlando West Soweto, Lerato Lichaba is a self taught Guitarist who began his journey with the guitar at the age of 16 years at the historical Uncle Tom’s Hall in Orlando West. Upon completion of his matric he went on to pursue his love for music by becoming a Disc Jockey. In 2006 he was involved in studio production and worked at Soul Candi Records as a Session Artist while studying Studio and Software Management at the Soul Candi Academy.

It was during this year that he began to take playing the guitar seriously. His distinct and unique style of playing has presented him with amazing opportunities both locally and internationally playing across a variety of genres. Lerato is inspired by life and how people relate, moreover, how different cultures and traditions blend in the language of his music. In music, there is no colour or creed; it is a place where all people can connect with each other.

In March 2014, having been inspired through travel and gaining experience throughout the years as a session guitarist, Lerato founded the Urban Village. It is a musical motion of sound fused by urban and rural influences based on society’s daily survival, struggles and joys. The band is made up of young, self-taught and experiential artists from Soweto, Johannesburg. The Urban Village sound can be described as South African folk music layered with electric, funky acoustic melodies and a blend of traditional influences.

The Urban Village music encourages and motivates, entertains, and awakens cultural and traditional consciousness. Moreover, the music content encapsulates day-to-day personal and societal experiences echoed with teachings by the elderly.

The band members have been performing in their individual capacities for a number of years. Tubatsi Mpho Moloi has been part of the Urban Village since its inception. He is a sensational and charasmatic vocalist and multi-instumentalist playing mainly the Flute and Rhythym Guitar since 2005. Previously, he has been touring the world with the renowned musical production, Umoja, where he was acting and dancing.

Xolani “Cush” Mtshali started playing Drums in 2008 where he learnt at a local church and has since taken a career in music. What inspired him to play drums was when he was really moved by rhythms and how they would make sense to him before he knew how to hold drum sticks. Cush believes that music does not begin on papers and scoring sheets but from within. He has sessioned for many bands in Johannesburg with one of his career highlights winning the Gauteng Department of Sport, Arts, Culture and Recreation Puisano Live Music Project competition for Best Band in the year 2011 – 2012 with L8 Antique.

Simangaliso “Smash” Dlamini began his music career as a Disc Jockey in 2005 and developed his skills in music production, sound design and music business at the Soul Candi Institute of Music. Later he pursued his passion for the bass guitar and also studied music theory, performance, arranging, composition and further studied music business. Simangaliso has shared stages with Peter White, Kenny Latimore and the New Orleans Big Band to name a few. To date he has collaborated and played bass for Motsatsing and The Rays, Watoto Wa Mduara Roho, Sun Xa Experiment, Morare and Nelisiwe. Artistic self-expression through performances, rehearsals and studio recordings fuels the band.

Their incredible interaction, improvisation and spontaneity during live performances go to show just how skilled they are as musicians. The feedback and response from fellow musicians, industry players, veterans, radio personalities and fans alike has been overwhelmingly positive! Among them: Madala Kunene, Thebe Lipere, Nicky B (Kaya FM), Thulane Shabangu (Music Academic), Mabi Thobejane are the many endorsers of the Urban Village music.