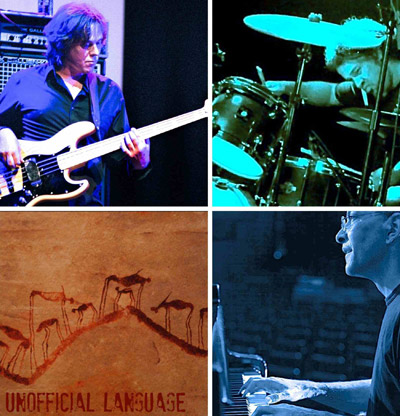 Unofficial language started at Kippies, back in January 1989 when Ian Herman, having left The Genuine behind and returned home to Jo’burg the year before, was scouting for new things to do: one of which was to go into a 3-week run at Kippie’s together with Peter Sklair on bass, Paul on keys, and guitarist Lawrence Matshisa. The repertoire consisted of music they all happened to love- by Don Grolnick, Michael Brecker, Miles Davis/Marcus Miller (specifically off the “Tutu” album), Yellowjackets, as well as the slow introduction of pieces written by the individuals in the band.

After that 3-week run, which was pretty common at the time (and in fact, another such run a little later that same year brought together Gito baloi, Ian & Steve Newman which, as many of them will know, made up the membership of “Tananas”) Ian, peter & Paul decided to keep on meeting in order to play music together. In fact this is unusual in that they were not out to acquire gigs; they met up in order to play together, to rehearse together, to workshop new ideas together – just because it was a pleasure and a privilege to do so. At times they would pay for rehearsal space just in order to be able to work undisturbed.

After some years, they performed here and there and then, in early 1993, as Ian and his family were about to leave for the USA, they were able to document this group with our debut album “primal steps” which was recorded as a special project by the then head of Gallo Music Publishers, Geoff Paynter – who really loved the music they were preparing and working on.

Two years later, through a small independent label called “Wildebeest Records” , they were able to record our second , very different , album called “move moves” which was released in 1998.

Since then, Ian & Paul worked on music for a documentary called “Stadig Oor Die Klippe”, which yielded our song “Hymn for The Ballies” and Paul have asked both Ian and Peter onto my own recording projects for Sheer Sound. Ian & Paul also recorded 8 duo tracks for a privately funded recording under the moniker “Two Ply” -in order to differentiate it from the trio “unofficial language” – which got together again in Jo’burg for a few gigs in 2006.

The band is about music really. The musicians absolutely adore one another and so they have a lot of joy simply making sound together.