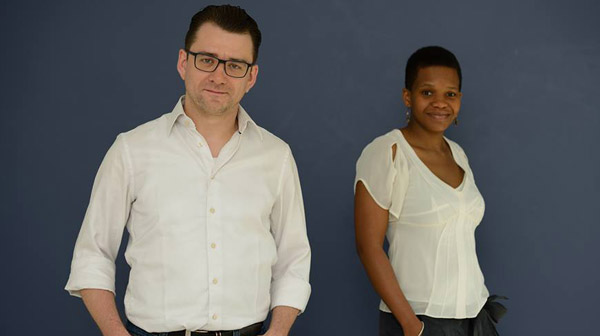 A duet, piano and voice, husband and wife, Europe and Africa. Belgian pianist Ewout Pierreux and African singer Tutu Puoane make a formidable team and this teamwork.
Ewout Pierreux was raised in a creative family, his mother a painter, father a sax player. He graduated from Halle and Gooik Music Academy in 1996 after which he studied in Leuven at the Lemmens Institute. Pierreux became the permanent pianist for the band Jazzisfaction (which became the Peer Baierlein Quartet) and toured Flanders and the Netherlands with “Goddam! A Tribute to Nina Simone“. Pierreux also started his own trio EP3, and has lately played piano for Rebirth Collective.
Tutu Puoane studied a degree in Vocal Studies at the Music College of the University of Cape Town, and after completing these studies turned down a major record label contract to take up an offer to further her studies in Europe. After recording two SAMA winning albums ‘Quiet Now‘ and ‘Song‘ she was invited to work with the Brussels Jazz Orchestra. This collaboration resulted in the album ‘Mama Africa‘ that celebrates Miriam Makeba, which won Tutu Puoane a third SAMA this time for Best Traditional Jazz Album. Puoane won the Old Mutual Jazz Encounters award for the Cape Region in 2000 and was the Standard Bank Young Artist for Jazz winner in 2004. Tutu Puoane has returns to South Africa for both the Standard Bank National Jazz Festival with her husband, Ewout Pierreux and for the Standard Bank Joy of Jazz Festivals.