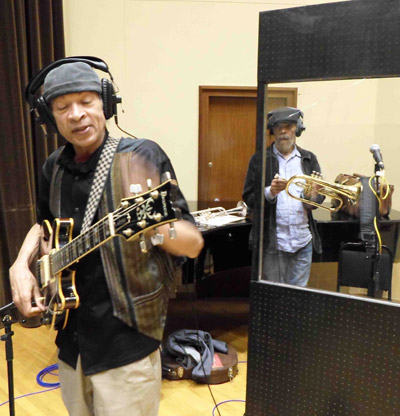 Born in Elsies River, Cape Town in 1952, Tony Cedras is a sought after session player who has toured the world as part of the Gracelands show band,and before that, as a member of Amandla cultural ensemble in exile.

Cedras’ first musical experiences were in the local church choir, singing and also playing accordion. He soon progressed to trumpet, taking in the local jazz scene, as well as the American jazz influences prominent in South Africa at that time.

Cedras’ became a key session player in the Cape jazz circuit, working with artists such as Jonathan Butler, tenor saxophonist Winston Mankunku Ngozi,altoist Robbie Jansen, flautist/guitarist Russel Herman, and bassist Basil Moses. The Estudio project, together with Robbie Jansen and others was acknowledged as a highlight of this period.

After touring inside South Africa, Cedras relocated to Gaberone, in the neighbouring state of Botswana in the early 1980’s. At that stage, Botswana was a home-away-from-home for many exiles, and it was here that he met trombonist/bandleader Jonas Gwangwa. Gwangwa was the musical director of the Amandla ensemble of the ANC, which Cedras joined, travelling not only in Africa, but also in Europe, Canada and Brazil.

While working with Amandla, Cedras spent time in London, where he made contact with other South African artists who were part of the ex-patriot South African music scene. He moved there in 1985, and soon formed the group Kintone, a band which “explored the common musical ground between its West Indian and South African membership”. Kintone recorded two albums for Sterns Africa, and built a solid live performance profile in the UK.

Late in 1986, Cedras returned to Southern Africa. He again worked with the exile artists community, participating in the Buwa project headed by Caiphus Semenya and Letta Mbulu. This musical toured extensively in Africa.While in Zimbabwe, Cedras was contacted with the request for him to join the Graceland tour band. Hugh Masekela had recommended to Paul Simon that Cedras could provide valuable musical input. Cedras thus toured with Paul Simon’s Graceland for most of the period 1987 – 1989, and then from 1990 -1992 with Simon’s Born at the Right Time tour.

Having built a solid working rapport with Masekela and Miriam Makeba (who also participated in the Gracelands tour), he did extensive work with their respective bands. He also toured with Harry Belafonte during 1993 and Henry Threadgill in 1994. His debut solo album, Vision Over People was released during this period, and he also returned to perform in his home, Cape Town.

Unlike many of his contemporaries, Errol Dyers is a self-taught musician who learnt his music on the street, drawing inspiration from the natural rhythms of both Cape Town and the people of the mother city, allowing people to interpret themselves through the music. Errol’s many releases include the albums ‘Sonesta’ and ‘Kou Kou Wa’, and his latest offering is a collaboration between himself, Hilton Schilder and Steve Newman, entitled ‘All in One’. During Errol’s illustrious career he has performed, recorded and toured locally and internationally with many great artists, including the late Basil Coetzee, Winston Mankunku Ngozi, Abdullah Ibrahim, the late Robbie Jansen and McCoy Mrubata, to name but a few.