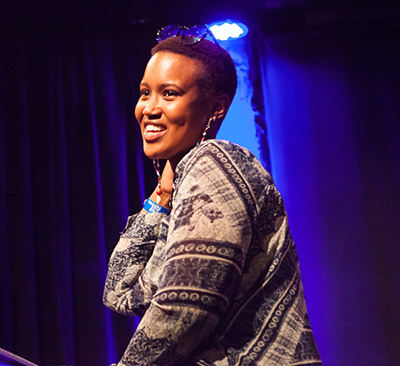 Thembelihle Dunjana is a young pianist from born in Cape Town in one of S.A’s historical townships, Gugulethu.

She is an improviser and teacher, who has, over the years, been very influenced by the transcendent realm of music and it being able to capture true honesty in a specific moment, to never be relived again.

Lihle started playing piano at the age of about, 11 years old, with a particular interest in searching and finding something new in the music every day, however, with the classical teaching she had at the time, this curiosity was somewhat inhibited and later found herself taking a large interest in improvisation and jazz, and has since graduated at the University of Cape Town with a BMUS is Jazz.

Lihle is continuously seeking to evolve her sound and perception of music and is strongly influenced by not only the greats, but by ordinary South Africans who choose to dig deeper into their musical and social norms.

In her youthful career Thembelihle has thus far performed at the Grahamstown festival, Cape Town fringe festival, Olso Jazz festival and recently at the Cape Town Jazz festival with the Delft Big band, as well as many other venues around her city and is ready to share her music with the rest of the country, and world.