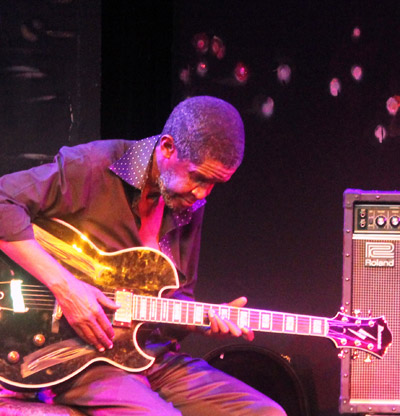 Themba Mokoena and friends at the Orbit is inspired by the Legendary Themba Mokoena himself. He has touched South Africa’s young and older generations of musicians and music lovers, but has often performed as a supporting act. His background support has contributed to creating some of South Africa’s “crème de la crème” – in jazz music, but also in other genres as such as opera, theatre, pop, choral and poetry. This event is about him, and providing the space for Themba Mokoena, the master guitarist to serenade, to shine, and to be seen by audiences in his full capacity as he manoeuvres among a variety of artistic genres
Themba Mokoena – Lead guitar
Bra Themba Mokoena is South Africa’s most loved guitarist. He navigates the world through mellow fingers on a guitar. This living legend has blessed stages across the world with the legend herself Sibongile Khumalo, with Hugh Masekela, George Lee Larnyoh and Simphiwe Dana, among others. Soweto for him has been home since the days of Gibson Kente where they worked together sharpening stars such as Brenda Fassie and Jimmy Dludlu.

Malcolm Xorile Jiyane – Piano and trombone
The multi-instrumentalist Malcolm Jiyane has resenated jazz music lovers across the globe in countries such as Germany, Sweden, Holland, USA and recently in France where he took part in Project Elo’s extraordinary performances. “This boy is the future Jonas Gwangwa,” said his mentor Johny Mekoe, founder of the East Rand Music Academy where Jiyane graduated. Jiyane also founded the Malcolm Jiyane Tree’o, which is never limited to an ensemble of 3. He is currently working with the talented Lindiwe Maxolo as producer on her upcoming album
Read more: http://www.theorbit.co.za/malcolm-jiyane/

Molefi Makananise – Bass guitar
Molefi Makananise is the bass guitarist for the Blk Jks, an unconventional rock band that has returned rock ‘n roll music to the tongues and steps of townships and villages across South Africa, including Lesotho and the Eastern Cape, and have transported the Afro/Township infused music to France, USA, England and Sweden among others. The Blk Jks performed with Vioux Farka Toure, Femi Kuti, Alicia Keys, and recently with the acclaimed Foo Fighters during their Johannesburg and Cape Town shows. Makananise is also a percussionist with the Moropa Orchestra Read more: www.blkjks.co.za

Natalia Molebatsi
Natalia Molebatsi is a South African performance poet who fuses the written word with music. She has recorded, performed and published works of poetry across the world including England, Italy, Senegal, Nigeria, Azerbaijan, Palestine, and Argentina among others. She is working on her second poetry collection “After the War and other poems” She is also a member of the soul/funk/jazz band The Soul Making who will be launching their second CD in Italy and Germany in March 2015. Read more: www.nataliamolebatsi.co.za

Special guest appearances by:
Sibongile Khumalo – South Africa’s first lady of song. The most celebrated member of a musical dynasty marked by an extraordinary vocal gene pool and passion for making music; she is a singer who personifies the rich and multi-sourced Southern African singing tradition. Themba Mokoena has been Khumalo guitarist extarodinare for years and the two have mutual respect and adoration for their art as well as contribution to the arts. Read more: http://www.theorbit.co.za/sibongile-khumalo/

Billy Monama
Billy Monama is a guitarist and composer who fuses the new and the old, and confronts the urban with the village. His ways of using the guitar are inspired and influenced by Themba Mokoena among other guitar masters. He founded the Billy Monama Quintet and has performed at among others the Standard Bank Joy of Jazz Festival; Promusica Theatre’s Summer Jazz & Blues Weekend and has collaborated with US saxophonist Dave Koz and Denise Jannah, Andile Yenana Themba Mkhize and legendary Abdullah Ibrahim.