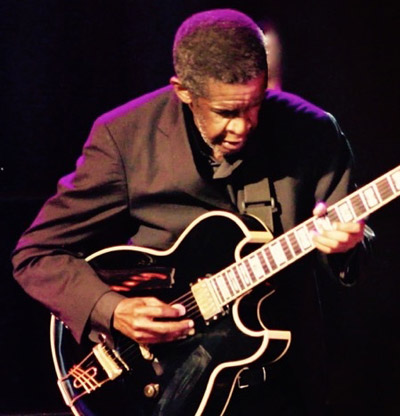 One of the country’s finest guitarists, Themba Mokoena was taught to play the instrument by an elder brother, Jotang ‘Joko Tea’ Mokoena. He started playing professionally in the sixties with marabi and jazz bands such as Sobantu Strangers and Black Magic. His primary inspiration was Wes Montgomery. He later joined the Durban Expressions, a jazz combo that toured extensively and relocated to Johannesburg in 1972.


He performed as a guitarist in most of Kente’s plays – ironically with the exception of his most famous production, How Long? He performed at Soweto’s famous cabaret club, The Pelican and later recorded with Jacob ‘Mpharanyana’ Radebe as a member of the great soul singer’s backing band, the Peddlers. The Pelican band consisted of leader and keyboardist Mac Mathunjwa, Godfrey Mgcina (drums), Bakithi Khumalo (bass) and the late Teaspoon Ndelu (sax).


In recent times he has toured and performed with Sibongile Khumalo in overseas gigs in countries such as Israel and Switzerland. He is revered by young musicians as a great guitarist and has mentored a younger generation of jazz artists such as Jimmy Dludlu and Selaelo Selota.