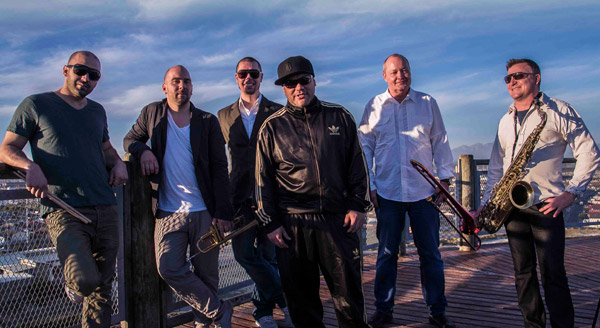 1992 saw the first performances and recording of the Nils Landgren “Unit”. The final breakthrough beyond Scandinavia came first in 1994: it was at the Jazz Baltica Festival at Salzau in Germany that the “Unit” became the “Funk Unit”. The album “Live in Stockholm” was released that year.

The next Funk Unit release, “Paint It Blue”, was one of 1997’s most successful albums and received Germany’s Jazz Award. The following tour of over 100 dates gave Nils Landgren and the Funk Unit their breakthrough in Germany.

In between 1999 and 2001, three albums of the Nils Landgren Funk Unit were released: after “Live in Montreux” appeared in 1999 “5000 Miles” and in September 2001 “Fonk da World”, which was presented live at a special 3 day festival in Hamburg dedicated to Nils Landgren’s music. The “grooving band, which encouraged the younger members of the audience into a dance frenzy, but which was also taken seriously by the greying jazz snobs” (Spiegel), proved that it could be counted as “the best funk band in Europe today” (Stereo).

In 2004, the Nils Landgren Funk Unit went full steam ahead and produced the acclaimed Platinum „Funky Abba“ album; the NLFU personal hommage to one of the greatest pop bands in history.

2007 brings the Funk Unit back again. The eighth funk album demonstrates the same killer groove as its award-winning predecessors lead us to expect. Nils Landgren Funk Unit definitely has it: the “Licence to Funk”.

Music knows no borders, music is freedom – this is Nils Landgren Funk Unit’s credo. For every record of his new Funk Unit album “Funk For Life” (released in spring 2010) sold, one Euro goes to the Funk Unit – Médecins Sans Frontières (Doctors without borders) project ”Funk For Life” in Kibera Nairobi. By purchasing the CD the buyer will contribute in making life for people in Kibera just a bit easier. And he helps to guarantee that from now on, music will be a central part of the education in Kibera.

After having toured all over the world in 2010, The Funk Unit is pacing down temporarely but only to regenerate and to write material for the next slammin´ Funk Unit Album, to be released in 2012. Watch out!
And dont worry, in 2011 we will be performing at a venue closer to you than you think!
Just keep a close eye at the tour schedule, it will be updated as soon as something new happens!

Live in Stockholm (ACT 9223-2) 1994
The first Funk Unit album, with Maceo Parker as special guest, dates from 1994 and was the foundation for the collaboration with Siegfried Loch and his then young ACT label.

Paint it Blue (ACT 9243-2) 1996
A hommage by Nils to the greatly acclaimed Cannonball Adderley. Guests included Bernard Purdie, the Brecker Brothers, Till Brönner and Airto Moreira. The album was one of the most successful jazz CDs of 1997 in Germany, reaching number 2 in the jazz chards and receiving the German Jazz Award.

Live in Montreux (ACT 9265-2) 1998
A highlight in Nils Landgren’s career was the performance at the ACT night at Montreux Jazz Festival in 1998. The enthusiastic reaction to the concert led to the release of the CD “Live in Montreux”.

5000 Miles (ACT 9271-2) 1998/1999
Between May 1998 and July 1999 the sessions for the Funk Unit CD “5000 Miles” took place in Stockholm, New York, Tutzing and Montreux. His unit played with some of the “hippest players” on the international jazz scene: Tim Hagans, Roy Hargrove, Till Brönner, Esbjörn Svensson, Viktoria Tolstoy, Don Alias and Fred Wesley. The album received the German Jazz Award and also an Echo nomination.

Fonk da World (ACT 9299-2) 2001
To coincide with the Funk Unit’s tenth anniversary, the album “Fonk da World” produced by Esbjörn Svensson was released, and was winner of the German Jazz Award.

Funky ABBA (ACT 9430-2) 2004
“Funky ABBA” was recorded in the legendary Polar Studio A in Stockholm where all the original ABBA songs were recorded and where Nils himself had stood in front of the microphone for the original ABBA recording of “Voulez-Vous” 25 years previously. The Funk Unit here was joined by special guests such as Till Brönner, Viktoria Tolstoy and, as “very special guest”, the great Benny Anderson himself.