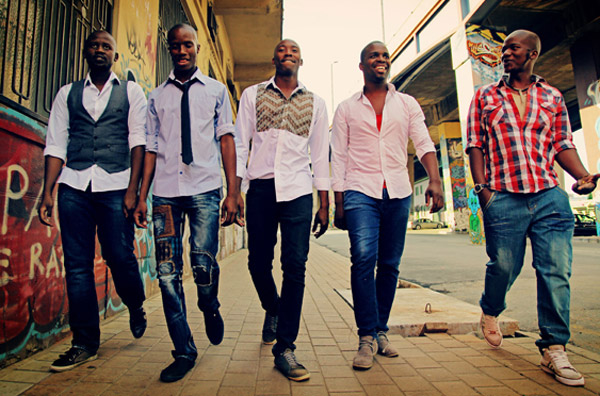 Soon, the question on everybody’s lips will be: “Have You Heard? Have you heard how The Muffinz rule the world?”. The Muffinz have unleashed their mysteriously beautiful world of eclectic soul to the South African public and they are set for world domination.

The music of The Muffinz is so new, yet so soulful, so accessible, so honest and so innocent, that it appeals to all age groups, races, classes and sexes.

The five young musicians make a refreshing change from the usual run of the mill rappers and house DJs, who are currently dominating the popular music scene, in that they play real instruments, and they play them well. Added to that is all five musicians are great singers in their different genres of expertise.

Take for instance electric guitarist and vocalist, Atomza. His voice is best described as a young Michael Jackson meets Usher with a twist of rock. Drummer Keke then enters with his Senegalese meets rumba vocals. The band switch from a groovy R&B rhythm led by acoustic guitarist Mthae and bassist Skabz, to a classy jazz guitar sound introduced by electric guitarist and acapella singer, Simz. And that by the way is just on one song!

That is why, to explain the band, they decided to call themselves The Muffinz. Explains Mthae: “We wanted a name that would be remembered, something catchy but a name that people would want to find out more about. Plus, we all come from different backgrounds musically and so we all bring different ingredients – as in the ingredients in a muffin.”

The group began in 2010 when Mthae, Simz and Atomza met while singing in the UJ (University Of Johannesburg) Choir. Now, while it may seem rather “unrock n roll” to many, the three of them decided to gather their guitars and form a band. They entered a competition at Cool Runnings in Melville and their performance was so good, recalled Atomza that they caused one of the judges to cry. “His name was Philip Howard and he was a journalist from Benoni. “He wrote such an amazing story about us that it was the big turning point for us. We realised that we could do this.” They went onto win the competition.

By April 2011 Skabz and Keke had joined the band and they found a residency in the same suburb of Melville. By their third Sunday night gig they already had a loyal following and four months later, they were the talk of the town, with people and celebs coming from all over Jozi just to catch a glimpse of this brilliant band of young, gifted, black musicians.

In August 2011, the independent label, Just Music, was invited to see the band perform an impromptu private performance in a tiny rehearsal room at the University of Johannesburg. They were so blown away with The Muffinz that they immediately offered them a recording deal.

This led to the boys recording ther debut album at the famous Jazzworx Studios where artists like HHP and Lira call their recording home. The album was produced by the band themselves as well as the Jazzworx team of Robin Kohl, Tebogo Moloto and LeRoy Croft.

The result of this intensive recording experience is an eleven track aural adventure called ‘Have You Heard?’ released in late May 2012.

The title track is already on high rotation on many regional commercial radio stations with Khumbul’Ekhaya enjoying success on Public Broadcast Stations.

With that amount of lyrical thought put into each song, and with such talent and diversity in this unique group, there is no doubt that The Muffinz will rule the world.