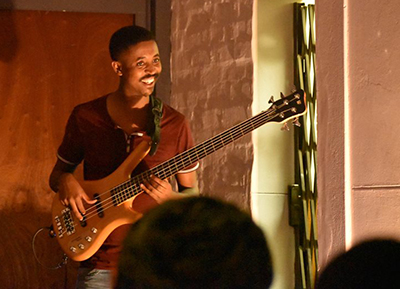 The Mshengu Project is a Jazz Music project founded by Lally Tshabalala in 2013. Lally’s music is inspired by several life events that he experiences, his music speaks about the love for his daughter and family. Songs like “Siyamthanda” and “Inkomakamma” are inspired by and project the way he feels about the birth of his and his upbringing.

During the early stages of his life, his love for music needed no further divine signs. Lally’s parents could see the little boy enthusiastically banging everything to rhythms. His family used to gather sing a lot, his home church (Zion) became a place where his ears picked up the melodies.

In the year 2000 he picked up his first musical instrument (Drums). Later went to learn the Bass Guitar which became his instrument of choice. He drew inspiration from Sipho Gumede and later discovered artists such as Fan Zulu from whom he also drew inspiration.