The Buskaid Academy of String Teaching and Performance 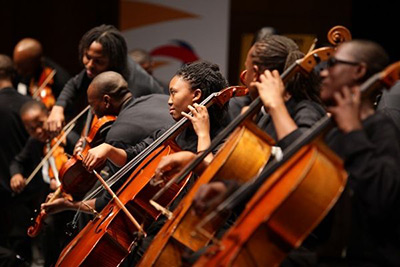 The Buskaid Academy of String Teaching and Performance was established by Rosemary Nalden in January 1997, in response to requests from the local community in Diepkloof Soweto. Its initial intake of 15 students has now grown to a membership of 115 children and young people, ranging in age from five to 33 years of age, all of whom are drawn from the local community. In 2002, to address these ever-increasing numbers, the Buskaid Academy introduced a teacher-training scheme for its more advanced students which has proved extremely successful. There are currently eight Buskaid musicians employed as highly skilled string teachers at the Academy.

The Buskaid Ensemble has toured internationally on 23 occasions, performing to huge acclaim in the UK, France, the USA, Ireland, Holland, Germany, New Zealand, Botswana, Syria, Colombia and Réunion Island. It is the only South African orchestra to have performed at the BBC Prom concerts in London (2007) and it was subsequently named by the UK’s Gramophone magazine as one of the world’s top ten most inspirational orchestras. It has performed in the presence of former President Nelson Mandela, for Her Majesty Queen Elizabeth II, HRH Prince Charles, and the First Lady of the United States of America, Mrs Michelle Obama