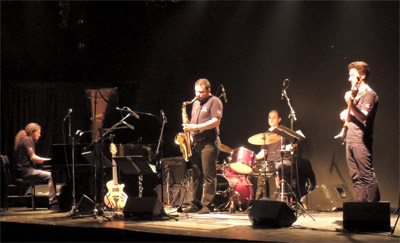 Tango Jazz Quartet is made up of Alejandro Beelmann on drums, Federico Hilal on bass, Horacio Acosta on piano, and Gustavo Firmenich on tenor saxophone and clarinet.

Founded in 2005, the band mixes the melodic and rhythmic patterns of tango with the harmonies and improvisation of jazz, and their creative approach to this musical fusion has received an enthusiastic response from audiences in Argentina as well as internationally. Over the last few years, the band has established itself on the international music scene, and in 2015 embarked on its fourth major international tour, with invitations to play at both new and repeat venues and festivals.

In Buenos Aires, in the 1930s, 40s and 50s, the stages at dance halls used to be shared by tango orchestras and jazz bands, with both music genres including an important aspect, improvisation. A cross-pollination between the two styles started to occur, and Gustavo Firmenich, founder and leader of Tango Jazz Quartet, has focused on exploring this, playing in various ensembles over the years, and with older tango musicians who played in this “Golden Age” of tango. His research also encompasses sourcing old records from the time, and drawing from that and his experience to recreate an authentic sound, infused with the band’s creative contributions.

The world-renowned French accordionist, Richard Galliano, after playing with Tango Jazz Quartet in 2010, commented “For the first time I have heard the fusion of tango and jazz really working, and the way they have incorporated the drums, and their respect for the melodies of the genre are two things worth highlighting”.

The band plays constantly in Buenos Aires and around Argentina, both at music venues, concerts and festivals, as well as at milongas, where tangueros gather to dance until the small hours of the morning. They even host their own milonga weekly in San Telmo, an older and traditional tango neighbourhood in Buenos Aires.

Tango Jazz Quartet has released four CDs, with the latest entitled “On Tour 2015”.
In addition to excellent audience responses, they have received special mention from the Cultural Section of the Argentinian Ministry of Foreign Affairs, and praise from the Argentinian Ambassador to South Africa, Carlos Sersale.
Their tours have taken them all over Europe, South Africa, Russia, Siberia, Hong Kong, China where they have played extensively, and at some of the most recognised and respected jazz clubs and festivals in the world, including the Hong Kong International Jazz Festival (2014), the San Jose Summer Jazz Festival in California (2014), the Snug Harbor Jazz Club in New Orleans (2014) and the Sunset – Sunside Jazz Club in Paris (2012 / 2013/2014).