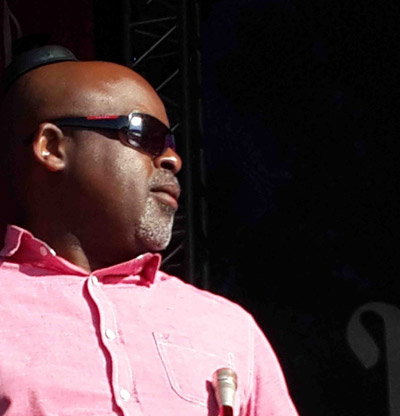 Born in Johannesburg and grew up in Barberton (Mpumalanga). Started learning trumpet at the age of 14, his father being his first teacher. In 1986 he was introduced to Prince Lengoasa who was his first formal teacher and later that year he studied with Brian Thusi in Durban. Through Brian he got a chance to play with Mario Monteregge’s Music Unlimited Big Band. In 1989 he then moved to Johannesburg where he did grade 12 and took some theory lessons with Cyril Khumalo at AMDA later trumpet lessons with Allan Wright.

He entered the Natal University for B Mus. Degree in jazz studies in 1992 under the directorship of Professor Darius Brubeck. During that time he took trumpet lessons from Michel Schneuwly (Principal trumpet player KZNPO) and arranging from Chris Metz. In 1995 he won a scholarship to study in the USA Florida International University (Miami) with the renowned Cuban trumpeter Arturo Sandoval and John Bailey (USA).He took conducting lessons from Dr Richard Holtz and Mr Ivor Bosanko (USA).

In classical field he has worked with Johannesburg Music Initiative (JMI), Kwa Zulu Natal Philharmonic Orchestra (KZNPO), Johannesburg Festival Orchestra (JFO), and the Johannesburg Philharmonic Orchestra (JPO)
Presently Sydney is working with Andile Yenana Quartet, Johannesburg Big Band, Graham Scott Big Band, Themba Mkhize, Khaya Mahlangu, Blue Bam Boo, Mango Groove, Stimela and Victor Ntoni’s Mzansi Ensemble where served as the assistant music director to Victor. He also leads his own Quintet.
He played in Bob Mintzer’s, Ann Hampton Calloway’s, Pharaoh Sanders’s, Rufus Reid’s, Yusef Lateef’s and Howard Johnson’s Big Band when they were in the country. He also played with the likes of Sibongile Khumalo, Vusi Khumalo, Jimmy Dludlu,Adam Glasser, Steven Dyer, Oliver Mtukutdzi and Mbongeni Ngema. He has recorded with most of them.
,
Sydney also formed part of the teaching staff at the annual jazz festival in Grahamstown, where played trumpet in the Awesome Big Band made up of local and international musicians.

He has toured in and out of Africa. In Africa he has been to the likes of Senegal, Nigeria, Kenya, Mauritius, Zambia, Zimbabwe, Namibia, Mozambique, Swaziland and Botswana. Outside Africa He’s been to UK, Holland, Germany, USA, Australia and New Zealand.