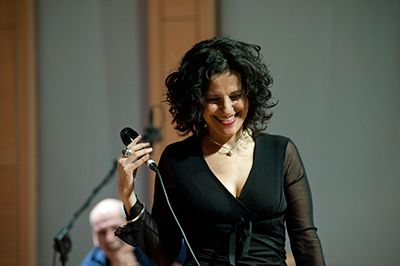 Susanna Stivali is one of the best know jazz italian singers of the last generation. Singer, composer and lyricist.

Her voice tells a melody, in the wake of vocal jazz tradition, but it also acts as an instrument, in search for new sound paths and encounters with other instruments.

She starts studying music, taking piano and classic singing lessons with M. Luigi Rumbo (Maestro of the Sistina Chapell)and Ms. Mara Rhormann, then she approaches jazz singing with Mark Murphy, Barry Harris, Bob Stoloff, Mily Bermejo.
In 1997 she obtains a scholarship at the Berklee College of Music in Boston, where she has the opportunity of deeply focusing in the study of jazz music.

Since 1994 she has been the guest in several RAI and Mediaset TV shows. She has appeared as a soloist vocalist in different film soundtracks with M. Andrea Guerra, M. Bruno Lochi, (Walt Disney Italia, Dreamworks)
Since 2005 she is artistic director of the jazz festival “IncontrinJazz” a itinerary festival helded in different archaeological location in the centre of Italy.

As a composer she writes music for cinema, theatre and television.
In 2006 she writes the original soundtrack of the movie: “La velocità della Luce” Warner Bros production.
In 2007 she write the song “Chiaraluce” that it’s included in the cd ”Stonata”, by Giorgia,one of the most famous italian pop artists
She also wrote the biggest part of the songs included in her cd’s A secret Place and Piani DiVersi.
In 2005 she is included with an original composition, within the first Italian Jazz Real Book published by Charish.

“Caro Chico”(Biscoito Fino)
Susanna Stivali had just recorded in Brasil, for the prestigious label Biscoito Fino, a cd dedicated to the music of Chico Buarque titled Caro Chico.Chico Buarque himself collaborated in the cd singing togheter with Susanna Stivali. In the cd there some great collaborations, names as the composer Francis Hime, the cello player Jaques Morelenbaum and the italian piano player Rita Marcotulli.

Homage to Wayne Shorter
Going For The Unknown

Susanna Stivali had just recorded a CD Homage to the music of Wayne Shorter : Going for the unknown. Going for the unknown is a quote by Shorter that reflects his poetics. The lens of this new project, is to look for new ideas, starting from the compositions and from Wayne Shorter’s style: modern, connected with the roots, synthetic and deeply lyrical at the same time.
A big part of the lyrics are written by the vocalist, in three different languages: English, Italian and Portuguese. Susanna Stivali did a specific study on how the lyrics could meet Shorter’s compositions, trying to respect Shorter’s poetics. In the cd there is an important contribution of electronic sounds which give a different flavor to the traditional sound of the trio and voice.
The trio features some of the best and versatile Italian jazz musicians: Ettore Carucci – piano; Marco Siniscalco – double and electric bass; Emanuele Smimmo – drums. The cd it will be out in November for Jazzit Magazine, one of the most important Italian jazz magazine label

She teaches currently professor of vocal jazz tecnique, jazz impro and repertoire of at the Conservatory of Music Luisa D’Annunzio in Pescara before she used taught at the Conservatory of Latina, Salerno, Bari, Lecce. She teaches giving master classes in Europe, Brasil, South Africa (Saje Jazz Conference) in different important schools of music in Italy such as Saint Louis Music College, and in various workshops around Italy such as Jazz’s Cool – the most important course in Italy regarding jazz high specialization organized cooperating with ‘Casa del Jazz’ in Rome (main carrefour of jazz culture in Italy).