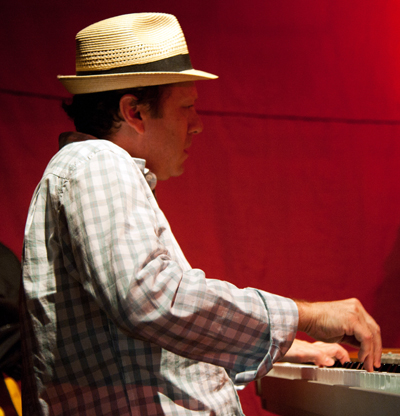 Steve was born in 1961 and he grew up in Johannesburg. His first memories of jazz were from the tender age of seven, when he dug into his father’s record collection and listen attentively and with great excitement and relish to the beautiful playing of Bill Evans, Oscar Peterson, Bud Powell, Monk, Miles Davis, Bill Holiday, Sarah Vaughn, Duke Ellington and a slew of other jazz greats. This began his life long passion for jazz. He took classical piano lesson from an early age, and branched out into jazz in his teens.

His influences draw strongly on the bebop era, starting in the 50s and continuing throughout the 60s. He is schooled in the tradition of jazz standards and has a strong affinity with the cool Bossa Nova sound that was started in the late 50’s by Joao Gilberto and his friend and associate Antonio Jobim.

Steve cut his teeth in the early days at the club Rumours in Rocky street, Yeoville, Jozi’s legendary jazz club in the 80s. He was mentored there by the inimitable bass player, Art Kelly and his regular pianist Stan Jones. He has played with South African greats such Tandi Klaasen, Winston Mankunku, Duke Makasie, Barney Rachabane, Herbie Tsoaeli, Charlie Sayers, Kevin Gibson and the departed Lulu Gonsana and Sipho Mtchali.