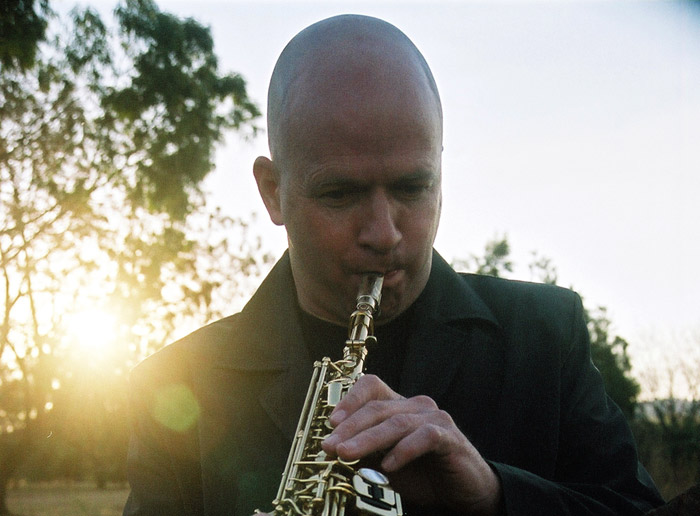 Steve was born in Pietermaritzburg, South Africa in 1960. His parents listened consistently to music of the Western classical masters. He also remembers maskandi musicians walking the streets as they played their guitars, and the Soul Brothers and “kwela” playing on the radio. He began composing music at the age of 10.

Steve completed a B Mus degree in performance at the University of Natal in 1981, majoring in saxophone and flute. Refusing military conscription, he then left South Africa and lived in Botswana for 5 years. Here he came into contact with the exile sounds blowing through the horns of Hugh Masekela and Jonas Gwangwa. He helped form “Shakawe” led by Jonas Gwangwa and played in the band for 3 years, where he immersed himself in the mbaqanga music tradition. At this time Steve also listened to saxophonists such as John Coltrane and Winston Mankunku.

In 1988 after a stint in the U.K. he settled in Zimbabwe where he formed the group Southern Freeway. Two albums were produced Southern Freeway (1989) and Indlela yenkululeko (1992). Steve came into contact here with the more introspective and often rhythmically complex mbira based Shona music, as well as reliving some Nguni based music playing with musicians that had Ndebele cultural roots.

In 1990 he joined the Amandla cultural ensemble of the A.N.C on a 7-week tour of Japan.

With democracy on the horizon in 1993, Steve returned to South Africa. After studying briefly at the University of Natal, he relocated to Johannesburg and directed the Soweto String quartet live performance that toured Europe and Australia/New Zealand.

He has released 6 solo albums since his return to S.A: Down South in Africa – 2000, Son of the Soil – 2004, Lifecycle 2006 (SAMA nomination) Native Art 2007 SAMA nomination, IAP (U.S.A.) finalist), Ubuntu music 2012 (SAMA nomination), and Confluence – 2014. Steve has also composed and performed for feature film and TV soundtrack, as well as for modern dance companies Moving into Dance and Tumbuka, as well as conceptualising and directing numerous shows and collaborations

In 2010 he composed and performed Rebirth, a first African concerto for soprano saxophone, orchestra with saxophones, African percussion and marimbas. Rebirth premiered in Johannesburg on 1st May 2010 with a 118-piece Miagi youth orchestra.

In April 2014 Steve was musical director for the opening show at HIFA (Harare international festival of the arts).

On 21st and 22nd August 2014, Steve released a c.d. of his latest recording project “Confluence” at the Orbit jazz club in Johannesburg together with an 8 piece band.

2015:
Steve performed at various venues in KZN on a homecoming tour with Concerts SA support in February.

He conceptualised, directed and performed in a groundbeaking multimedia work called “Colour Me Human – a new world musical” that premiered at Soweto theatre in May. The production also did a run at the Jo’burg theatre from 12th to 30th November.

Steve performed with his quartet at the Orbit jazz club’s 2nd year anniversary on 18th March 2016.

On 27th May he directed Africa South voices featuring Zamajobe and Selmor Mtukudzi and Tariro from Zimbabwe at the Jo’burg theatre as part of the Africa week celebrations.

In September 2016 Steve directed a show for the African writers workshop that brought together singers Hope Masike from Zimbabwe, Msaki from the Eastern Cape and Nothende from Johannesburg.

In 2017 he conceptualised a show called “Mantswe a Marabi” paying tribute to the Marabi musical tradition.

In May 2017 Steve directed a new look Mahube for the Harare international festival of the Arts, as well as at Jo’burg theatre for the Africa week celebrations. Mahube performed on the main National Arts festival in Grahamstownto to a standing ovation in July 2018. Mahube has just finished a recording project due for release late 2018.