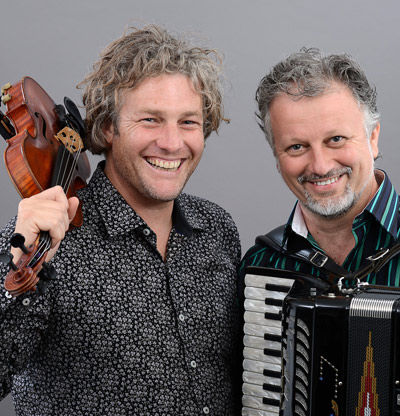 He received his first Accordion as a present from his parents at age of 5. He started formal Accordion lessons at the age of eight in his native town Shumen (Bulgaria). At age of 10 he joined the Junior Accordion Orchestra, which was conducted by his Teacher. In 1984 he won a Gold Medal at the National Festival of Performing Arts in Bulgaria. During the 1980s he recorded several times with the Accordion Orchestra for the local Radio Station. In 1985 he was accepted at The Academy of Music and Dance in Plovdiv-Bulgaria, where he studied Accordion with Prof. Peter Marinov and received a degree in Accordion in 1991, after which he taught at the “Constantine Preslavsky” University – Shumen. Until 1992 he has taken part in competitions and concerts in Bulgaria, France and Poland as a soloist or member of different ensembles or Accordion Orchestra. In 1992 he moved to Cape Town, where he performs, records and teaches.

Stanislav has done recordings for SABC and has been featured on CD’s of many South African Artistes. He released his solo album called “Stanislav” in 1997 CD “El Tango en Africa”of his Cape Town Tango Ensemble was released in May 2003.

In 2004 he was commissioned to compose a song and some of the Music of the Sound Track for the short film “The First and Last Love of Leonardo Lopes”. He has recorded many times for Radio & TV adverts. As a Symphonic orchestra member he performed together with Cape Town Symphonieta in 1999 at Sun City Super Bowl accompanying the British singer Elaine Paige.

In 2000 he joined the orchestra for the production of “Fiddler on the Roof” at the Arts Cape Theatre. In 2001 he appeared together with his Cape Town Tango Ensemble in the production of the show “Tango del Fuego”, written & directed by Martinus Bassoon at Oude Libertas Amphitheatre; Grahams town, Klein Karoo and Potchefstroom Arts Festivals; and in the TV series “Back stage” on E-TV.

In October 2003 he performed together with his Cape Town Tango Ensemble at the Bank Windhoek Arts Festival – Namibia, which was recorded and later broadcasted on Namibian National TV.

On 29 November 2003 Stanislav was invited to perform on “Nelson Mandela 46664 Concert” on Green Point Stadium–Cape Town, where he performed 2 songs “Say it is not true”, where he accompanied Brian May & Roger Tailor from Queen and Dave Stewart and later in the program he played “Great song of Indifference”, where he accompanied Sir Bob Geldof. There were over 40 000 people on the stadium and the concert was broadcasted to an estimated audience of three billion people, which makes it the world’s most widely distributed event.

In February 2004 he was invited by the Cape Philharmonic Orchestra to perform the Concerto for Bandoneón and orchestra by Astor Piazzolla, which he performed at Cape Town City Hall and Endler Hall – Stellenvosch.

During 2004 he performed the leading Bandoneón part in the production of the Tango Operita “Maria de Buenos Aires” by Astor Piazzolla at Oude Libertas Amphitheatre; Grahams town, Klein Karoo and Potchefstroom Arts Festivals. Later same year he performed together with his Cape Town Tango Ensemble and Mark Hoeben & Ina Wichterich from Tango Cape Town at the Bank of Windhoek Arts Festival – Namibia. Later same year Stanislav added a new and very important item to his instrument collection and that was his first Bandoneón.
During December 2004 Stanislav and his CT Tango Ensemble accompanied the Tango show “El Beso” directed by Heinrich Reisenhofer & Choreographed by Mareli Schröter of El Cacha Tango company with sold out run at Little Theatre – Cape Town
In 2005 he performed with great success with his Cape Town Tango Ensemble at the KKNK. Later same year Stanislav took a trip to Buenos Aires to study with Bandoneón Maestros Ricardo Fiorio and Hugo Satorre.

In 2006 he repeated KKNK this time in two different shows: “Tango de la Buena Esperanza” – all shows were sold out and “All about Tango”.

In 2007 he led an extended 6 piece version of his CTTE for a Tango item at “Fleur du Cap” Theatre Awards with Mark Hoeben & Ina Wichterich at Artscape Theatre. Later same year together with his CTTE he provided the Music for a scene in the German film “The time of the Snake”. He released in 2008 the CD “OPERA deLight” with the group Belle Voci.

In March 2010 he released the second CD of his CT Tango Ensemble called “Tango Club” which so far has been received by the audience with great enthusiasm. This album includes 3 of Stanislav compositions.

During 2011 he performed at Oude Libertas Amphitheatre in Stellenbosch, KKNK 2011, in Durban & Pieter Maritzburg, Brooklyn Theatre in Pretoria & UJ Theatre & Montecasino in Johannesburg.

During September – Ocotber 2011 together with his CT Tango Ensemble he toured Germany and performed at Gewandhaus in Leipzig as well as other venues in Leipzig, Nou Tango Berlin, Mala Junta Berlin & Rainbow Dance Factory in Tübingen.
During 2012 he was invited to perform the Concerto for Bandoneón and orchestra by Astor Piazzolla this time with the Eastern Cape Philharmonic under the baton of the Colombian born Maestro German Gutierrez. Later same year he performed with CT Tango Ensemble at the Cape Town World Music Festival.