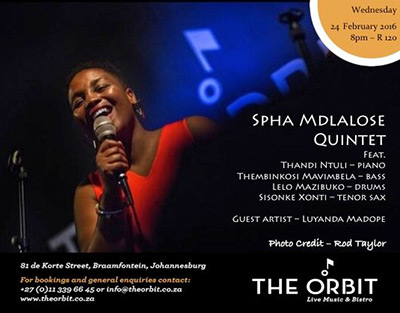 Spha (Siphathisene) Mdlalose was born in Durban in the township of Umlazi. Her family’s move to Cape Town prompted Spha to join the school choir and later her high schools Jazz Band where interest in jazz flourished. She was later accepted to the University of Cape Town’s South African College of Music in 2006 to study her Bachelor of Music degree majoring in Jazz Vocal performance. In her years as a student, she enjoyed a budding career, having performed with the Mike Campbell Symphonic Orchestra on numerous occasions. Upon graduating, Spha achieved an 81% pass mark and also found herself on the Deans Merit list. To date she has performed alongside Bheki Khoza, Yvonne Chaka Chaka, Micasa, Oliver Mthukudzi, Neo Muyanga,

She was also fortunate to tour with Grammy nominated Josh Groban when he visited South Africa on his “Straight to You” tour and also with Grammy award winning gospel artist, Isreal Houghton who performed in Zimbabwe. She has just returned from Norway, where she performed at the Oslo Jazz Festival and the Arendal Jazz Festival as a part of the Andreas Loven trio. Spha is currently working on her debut album, which she hopes will showcase her compositions and also her musical influences.