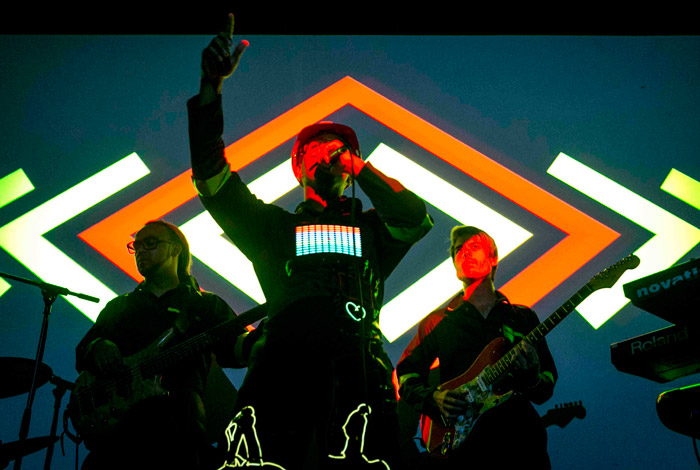 Soul Housing Project is a five-piece multinational band based in Cape Town, originally founded in 2007 by Bokani Dyer and Sakhile Moleshe. Their music reflects their international, southern African and urban Cape Town influences: rich, warm vocals, layered with a touch of that classic soul sound, topped with accents of hip-hop, jazz, house and drum&bass.

The band is lead by Sakhile Moleshe with his “unmistakably magnificent voice” and Bokani Dyer on the keys and synths, Soul Housing Project is completed by Eugene “Mr. Grooves” Ackerman on bass, Al “Dirt” du Toit on guitar and Congolese drum maestro Kissangwa Mbouta. Soul Housing Project has played gigs over the years at a variety of venues and events in Cape Town including their 3 year old residency at the Grand Daddy Hotel, the FIFA World Cup Fan Park and Pan African Space Station, building up a solid base of audience appreciative of their original compositions, rich harmonies, soothing melodies and enlightening lyrics.

After a few years of experimentation, various band permutations as well as extensive travel as members of other musical projects, Soul Housing Project has come into its own and is working towards finalising their first full-length album. The band has been gathering momentum in their efforts to boost their local appeal and reach audiences from grass roots backgrounds to world-class stages. On stage they are dynamic and energetic, getting the crowds to their feet and dropping fat beats which no doubt “keep the fires burning“ just like the refrain of one of their most popular songs
“Furnace of the Mind”.

Dubbed the ‘Soul Housing Project’ because it provides a much needed sanctuary for the band and their fans’ deep desire for really good music, SHP is committed to taking their music to wider audiences, beyond city limits to the rest of South Africa and indeed overseas. They see the band as providing a home of music for the soul, offering healing and inspiration. As well as sharing their music and working towards the band being a household name, Soul Housing Project are also committed to developing the local music industry and upliftment of talented young musicians. They enjoy sharing stages with other bands and taking part in music projects with a wider scope.

All their songs are original, composed jointly by Bokani Dyer and Sakhile Moleshe, and music can be heard on their SoundCloud soundcloud.com/soulhousingproject‎ page and soon on their upcoming debut album.