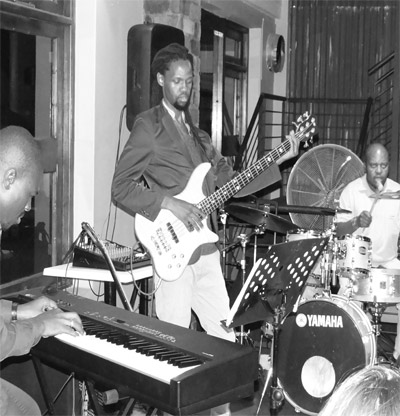 The Sophiatown Trio is a combination of three S.A musicians who has been contributing immensely within the South African Music Industry even abroad through their collaborations or sessioning with other industry players. The Sophiatown Trio is: Bernice Boikanyo aka “THE GROOVE MASTER” (DRUMS) Thembinkosi “BANDA” Banda (BASS) & Nathi Shongwe (PIANO). The trio begin sharing the music together since 2012 in a place called SOPHIATOWN as a regular band on Sundays & invite musicians to do jam sessions to keep live performances, hence the name Sophiatown Trio.
Individually the Trio has their projects that they’re involved in as producers & they are solo artists in their own right.

Bernice Boikanyo one of the prolific drummers in the world, not just a drummer but a producer, arranger, songwriter & singer. Born in Soweto raised in North West/Bapong-Brits. He graduated with Music Diploma in Funda Arts Center and a Music Business Diploma at Phakamani Music Industry Institute his presently studying Marketing Management with Unisa. Bernice released his solo album “MY SOUL” in 2011 under his own label BOIKANYO MUSIC PRODUCTIONS which has been doing extremely well in Europe even to date. His been working on his second project, which will be released soon. Bernice has graced the stages such as 2012 London ParaOlympics, The Grahamstown Arts Festival, North Sea Jazz, to mention a few. He has been featured in albums such as Ringo Live, Simphiwe Dana’s/ZANDISILE, Kunle Ayo/BEST OF BOTH WORLD, Gloria Bosman/LETTERS FROM THE HEART to mention a few.
For more info visit: www.boikanyomusic.biz

Banda Banda is a well travelled Durban born Bass player who has earned great respect. He has a unique bass playing, production and as a composer has stood up. Banda has a project that his hearding called Banda & The Crocodile Projects.

Nathi B is a pianist from Swaziland, his passion for singing i.e. his first love has elevated him to work out possibilities with piano that have contributed to his unique playing of the instrument. Inspired by the people around him he has often said “Melodies that are perfect are from a children because they’re honest and not yet tempered with”. Nathi B has had an honour to be invited by the National Heritage Council to perform in the opening of the African Museum in Serbia to mention a few. His currently involved in numerous productions that have proved to have an influence in which music is taking place presently.