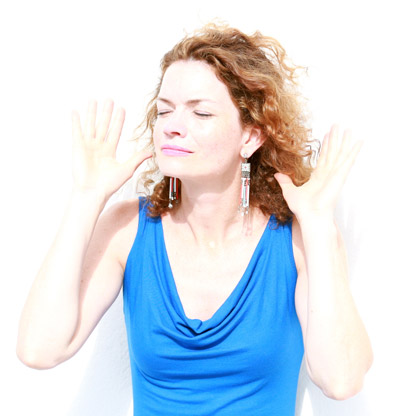 Sonja Kandels’ singing style and her idea of creating “The Power Of Voice” project are based on her childhood experiences in Africa. With her parents working for foreign aid projects, she spent the first twelve years in Niger and Cameroon. There, she developed a great curiosity for African tradition and a strong devotion to the music of the Pygmies.

After studying arts and jazz music in Germany, she began performing as a jazz singer. For her music projects and workshops, Sonja has been granted several scholarships from the German government, some of which led her back to Africa in order to work with musicians in Senegal and Cameroon or to study the Baka Pygmies in the rain forest between Cameroon and Congo.
Today, Sonja’s artistic work as a singer and bandleader is a multifaceted, dynamic fusion of African music and modern jazz, far beyond stereo-typical folklore or drumming groups.

“Besides my love for African music, I am always touched by the friendly and open way foreigners are welcomed. The impartial hospitality of the people and the way they are connected to nature and spiritual life has always fascinated me. This built my picture of African people much more than the common images of famine, war, and catastrophe. My music shall not only entertain, it means ‘thank you’ and it is an acknowledgement to many African people who became close friends and who taught me a lot about life. It also is an appeal to show great respect to African culture and look beyond the cliché.“
With the greatest ease, Sonja Kandels is singing in English, French, or Portuguese, in Kisuaheli and various dialects from Togo, Cameroon, and Senegal, such as Ewe, Baka, or Woloff. And when all these languages are not sufficient to express her feelings, she sings in her own fantasy language, using her voice as an instrument and reproducing the whole ethno-sound in a natural way.
She recorded two CDs with Minor Music Records, “God Of Laughter” and “Fortunes Arrive”, featuring African musicians such as Felix Sabal-Lecco, Guillaume Juramie, Baba Gallé Kanté, Samba Sock, and Aly Keita. A new recording, “Pygmyzonia”, is scheduled for 2013.

In 2005, Sonja was granted a governmental stipend for her newly founded choir project “The Power Of Voice”.
Since then, Sonja has been teaching African singing to more than 1,000 children in two to three-month workshops and performing with them on Jazz Festivals (Viersen Jazz 2006 and 2007, Jazz Rallye Dusseldorf) and on international conferences (Africa Forum of the German president, One World Village Berlin, EU-Africa conferences).
“The power and the magic that emanate from African singing are based on the oneness of voice, body, and movement, an aspect that is mostly ignored by European singers and choirs up to the present day. With my work, I want to give young people an understanding of it and also make this tangible and usable for our choirs and singers here.”