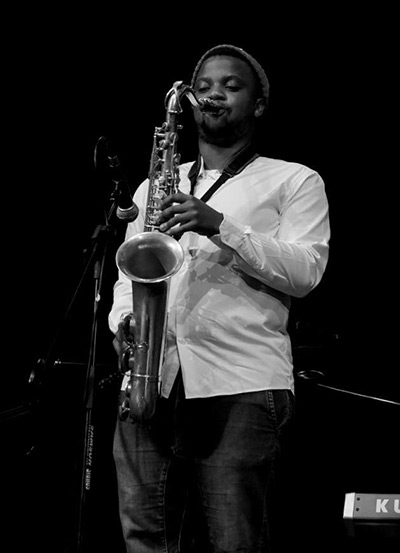 Sisonke Xonti started playing music at the age of ten but it was only when he turned thirteen that he fell in love with the saxophone and continued playing classical saxophone until he got his UNISA Grade 8 Distinction (2006).

His introduction to jazz came at the age of sixteen (2004) when he joined the Cape Town based band, The Little Giants, led by George Werner and the late Ezra Ngcukana. That same year, he was selected to be a part of the School’s Big Band at the Standard Bank National Youth Jazz Festival in Grahamstown. And later (2007) was also selected for the National Youth Band for the first time under the leadership of Dr. Andrew Lilley. He has since played with an array of highly acclaimed musicians, namely Jimmy Dludlu, Victor Ntoni, Lira, Hugh Masekela, Judith Sephuma, Dj Christos, DJ Vinny DA Vinci, Herbie Tsoaeli, Feya Faku, Freshlyground, Neo Muyanga, Bheki Khoza, Barney Wailer from Bob Marley and the Wailers, Mike Campbell and the UCT Big Band, Abdullah Ibrahim and The Cape Town Jazz Orchestra, CODA, Kyle Shepherd, Bokani Dyer, Marcus Wyatt, Goodluck, Lwanda Gogwana, The International Youth Jazz Band, Simphiwe Dana, Andile Yenana and also as band leader in his own jazz project.

He’s worked in studio with many artists on their albums namely Lwanda Gogwana whose album was later nominated for 3 South Africa Music Awards (SAMAs), Jimmy Dludlu, Sisa Sopazi who was also a SAMA nominee, GoodLuck, Freshlyground, Bokani Dyer and one of South Africa’s most well known reggae bands, Azania.

He is a Co-founder of Deluge, an electronic house project with Thandi Ntuli and their album is due for release later this year (2016). In October he will be going into studio to record his debut jazz album be on the look out for that…..