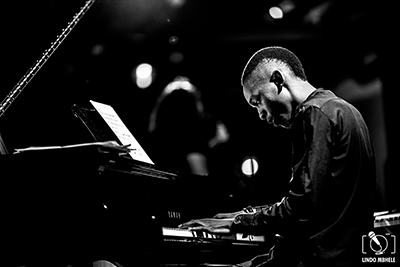 Born in Johannesburg in 1993, Siphephelo Ndlovu grew up with aspirations of becoming a musician one day. He attended the Drakensberg Boys’ Choir School in 2007 and 2008, which clarified his goals of becoming a musician by profession. Working with outstanding conductors and instrumentalists in the choir, Ndlovu gained the fundamental tools to embark on the journey of musicianship.

After graduating from the Drakensberg Boys’ Choir school, Ndlovu attended Northcliff High School for the remainder of his high school career, in which he was involved in the high school major productions. During this time, he formed an a cappella group called DaCapo. Ndlovu performed at many major school events with this group.

Ndlovu got accepted to study a Bachelor of Music degree in Jazz Piano studies at The University of the Witwatersrand and is currently completing his degree. Being taught by well-known musicians and lecturers such as Andre Petersen, David Cousins, Carlo Mombelli, Jonathan Crossley, Malcom Nay and Marian Freidman; Ndlovu has gained knowledge from incredible sources who have played a big part in his musical development.

In March 2016, Ndlovu formed The Siphephelo Ndlovu Project, a collection of his original compositions which incorporate his South African culture with his knowledge of jazz. The music of The Project is inspired by his experiences of both his musical environment and his influences (musical and traditional) growing up between Johannesburg and Bergville, KwaZulu Natal. It is a conglomerate of the Jazz, Gospel and uMbaqanga genres. These are the main genres which Siphephelo Ndlovu grew up listening to and which have influenced not only his playing, but his interpretation and language of music.

In 2017, Ndlovu joined the band Youthphemism, an urban band composing and performing music across the genres of soul, hip-hop and jazz-fusion. In this band he works with fellow musicians Elizabeth Gaylord and Ndumiso Manana.

In 2018, Siphephelo earned his Bachelor of Music degree with Honours at the University of the Witwatersrand.