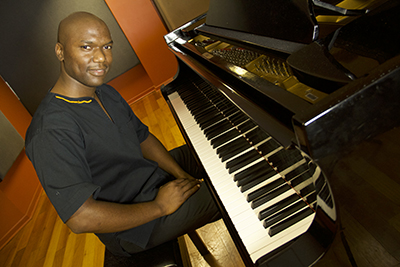 With his catchy, self-written compositions that always aim to blur the line between jazz and other genres Sibusiso “Mash” Mashiloane is quick in winning the hearts and minds of a large public. Him and his band played not only the main stages of the KwaZulu Natal circuit, but also many major jazz festivals and his live performances brought him as far as USA. As a pianist he appeared with many different groups around the world and was initiating projects of his own. After getting his Masters degree in Jazz Performance and graduating with distinctions from the University of KwaZulu Natal his aim is now to become an integral part of the South African and international jazz scene. Mash plans to release a seven-track album every year for the next seven years starting from this year 2016.

Mash has also built a career in South Africa as a musical director. His gigs are inspired by funk, hip hop, gospel and traditional music from South Africa, attracting music fans of all genres as well as straight ahead jazz aficionados. At the same time he has explored in depth the repertoire of composers such as Bheki Mseleku, Kenny Kirkland, Joey Calderazzo, McCoy Tyner, John Coltrane, Wynton Kelly and Bud Powell.

“A fabulous ride on a scintillating combination of energy and sound……The joy of listening to a passionate, innovative and confident musician is hard to beat. It’s a form of transport to another place where only music exists and every note counts.”

“Mr Mashiloane’s performance and compositional style reflects an interest in fusing the various forms of traditional and contemporary South African sounds with jazz, and more recently, Neo-Soul. He is particularly affable and a first-rate musician who is in high demand as an accompanist and musical director and has many successful musical collaboration projects to his credit. “ Testimonial, pianist and tutor Neil Gonsalves

Mash developed an interest in playing a piano in 1997 when he was thirteen years old. He started playing at church with the help of a senior church pianist, who taught him piano fundamentals. In 2001 he met a professional musician who was a student at the Natal Technikon. He performed sophisticated harmonies that he had never heard before. Mash was so struck by his ability to perform popular jazz numbers just like on the original recordings. This was when he started asking questions and wanting know more about how to achieve this level of performance. When he was doing his matric he auditioned at the Natal Technikon and was accepted to study music. At the end of his third year of study, the Durban Institute of Technology (former Natal Technikon) merged with the University of KwaZulu-Natal (UKZN) and that opened new doors for Mash. He was able to apply for an exchange programme offered at UKZN to study in America and was accepted by Rowan University in New Jersey.

Although he was in the final year of his diploma, he realized with some measure of frustration that in fact he was still at the very beginning of his performance development. He was passionate about improvisation and playing beyond the ordinary and this made him want to learn complex works.

When he got to Rowan University in 2006 he found that most of the students were really hard workers; they spent many hours in the practice rooms and were very attentive to detail in transposing patterns, transcriptions and full pieces through all twelve keys – something South African students rarely do.  He then began modeling his style on Charlie Parker’s rhythm changes in the songs “Kim” and on the heads in “Donna Lee” and he transposed them through all twelve keys. That transformed his understanding of the songs themselves and of their intervals and keys.

The next two years, 2008–2009, were a time of reflection for him, shaping his playing and unpacking all the information he had so far accumulated. In 2009 he entered the SAMRO National Music Competition and was awarded a Merit for Performance. In these two years of reflection, he came to identify four areas that he mastered in his Master’s Degree in jazz performance that he currently holds.

He not only received a distinction for his recital, but his band attracted more work for jazz festivals, competitions and other music opportunities.

Get in touch with Sibu “Mash” Mashiloane on the following platforms: