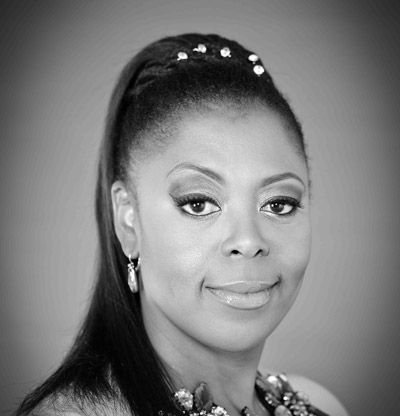 Sibongile Mngoma performed the role of Bess in Porgy and Bess at the Tel Aviv opera house in 2011 and reprised this role in a tour of the UK in June/July and in Cape Town in October – 2012. She continues doing classical and jazz concerts as well as corporate performances and she will release an album in 2013 in which Classical meets Jazz.   She has made name for herself as one of the very few completely cross over artists in South Africa. She easily moves from opera to classical to jazz and gospel and she has become a very popular feature in the corporate market. She has won two major awards – The Standard Bank young Artist Award and the FNB Vita Award for best Opera Female Lead.

Born in Soweto, Sibongile Mngoma was described, as a ‘natural diva’. Schooled in kwa-Zulu Natal, she completed a BA degree at the University of Cape Town, and went on to study honours in Drama in Education. Sibongile Mngoma also studied opera at the UCT College of Music and at the Accademia Musicale Chigiana in Italy, where she was awarded top honours. She was one the finalists in the Rolex Foundation Mentor\Protege programme for 2004\2005 with Jessey Norman. She has performed in all the major opera houses in South Africa with most major orchestras.

She took part in the Two Nations Celebrate concert at the Royal Albert Hall in London. She also performed at an international conference in Cannes. She was a soloist in the Johannesburg’s Civic Theatre’s Andrew Lloyd-Webber in Concert series and wrote and performed in the show Woza! – a celebration of SA Musicals. She also presented a Voice/Piano Recital at the State Theatre, Pretoria with Russian pianist Galina Ryjikova.

Oratorio work includes Handel’s Messiah, Rossini’s Stabat Mater, Mozart Requiem, Brahms’ Requiem Mass, Mozart’s Coronation Mass, Purcell’s Pulcinella, Khumalo’s UShaka kaSenzangakhona in which she was the soprano soloist for the Sony Music CD recording. She also sang with Abel Motsoadi at the Grahamstown Festival, and appeared in the Debut with Mimi. Choral works include solo appearances at the Caltex Massed Choir Festivals, both in Cape Town and Johannesburg, SABC concerts and The Last Night of the Proms in Durban, Pietermaritzburg , Johannesburg and Cape Town.