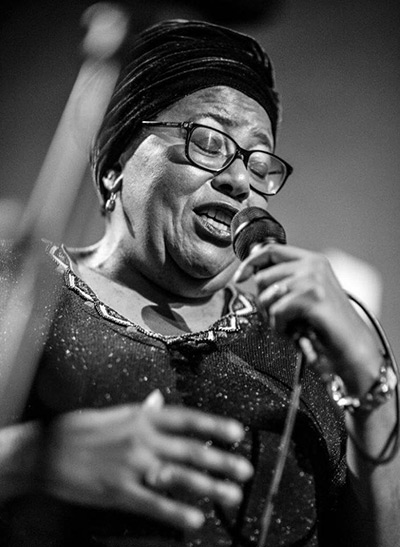 Sibongile Khumalo is the most celebrated member of a musical dynasty, marked by an extraordinary vocal gene-pool and passion for making music.
She was born and grew up in Orlando West, Soweto. Her parents, Grace and Khabi Mngoma were active community members involved in the cultural upliftment of the communities where they lived, and instilled in her an abiding love and appreciation for South African music and culture.

Sibongile’s singing talents range from opera to jazz, choral music and musical theatre, always grounded by the traditional and folk musics of South Africa.
She has been lauded as one of the great singing talents of her time, and has inspired the creation of new music by South African composers, both in the classical art song, opera as well as jazz genres.

While her first love is the stage, and because of her love for teaching, this singer-songwriter-producer mentors young performers. She is an ardent proponent for Arts Education.

Among her many accolades, including various awards for her stage and recorded work, Sibongile holds the Order of Ikhamanga in Silver (2008). This is one of the highest acknowledgements South Africa has bestowed on her, in recognition of her contribution to the advancement within arts and culture.

A consummate professional, Sibongile is not only a household name in South Africa, she is recognised wherever she goes, spreading vocal magic, warmth and passion to young and old alike.

In February 2016, Sibongile Khumalo released her much anticipated studio recording, Breath of Life, after an absence of 7 years from the

Mixing silk, silver and earth in magical combinations, her artistry is massive, glorious and multi-faceted.