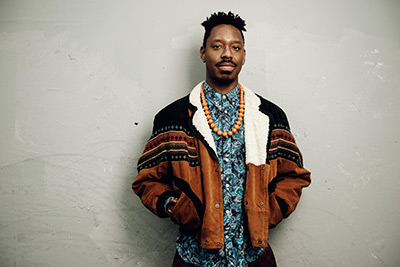 Shabaka and the Ancestors is a meeting of UK based saxophonist Shabaka Hutchings and some of the brightest stars on the Johannesburg jazz scene. After collaborating in various formations over the past three years, including the Amandla Freedom Ensemble, Tumi Mogorosi’s Project Elo and Nduduzo Makhatini group, Shabaka decided to record an album of his own material. This album will be released mid September on Gilles Peterson’s Brownwood label and is entitled ‘Wisdom of Elders’.

On the meaning of this title and inspiration for the album Hutchings states – ‘When we study the music, the lives, the words of our master musicians we obtain a glimpse of that artist’s essential energy source. This is the core vitality of the individual which leads them to utilise the specifics of their chosen mode of expression in a manner which mirrors their inner source of power. This is an intuited wisdom that is handed to us from the legacies of our elders.’

Shabaka Hutchings is a Barbados raised, London based, saxophonist. He fronts the MOBO award winning group Sons of Kemet and the Mercury Prize nominated group The Comet is Coming. He completed training in classical clarinet at the prestigious Guildhall School of Music in 2008 and has composed classical works performed by BBC concert Orchestra, London Sinfonietta and Ligeti Quartet. He has performed with many jazz masters including The Sun Ra Arkestra, Charlie Haden’s Liberation Music Orchestra, Jack DeJohnette, Louis Moholo, Mulatu Astatke and King Sunny Ade. He is also at the vanguard of the new London music scene performing with electronic musician Floating Points, Soweto Kinch and The Heliocentrics.