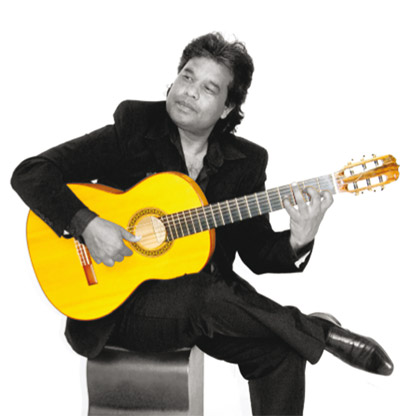 Saudiq Khan (Flamenco Guitarist) hails from Cape Town, South Africa, and lived in District Six as a child where he experienced the heart and soul of South African Cape Culture. He was inspired by Flamenco guitar music at an early age and was determined to find a way to learn the music he loved.

In 1989 Saudiq travelled to Spain where he experienced the Spanish culture in the heart of the Flamenco world of Seville. During his stay of 9 months he studied under various Flamenco Aficionados, learning as much as he could from their techniques and style. On his return to South Africa, he became involved with various Spanish Bands and Flamenco Dance Groups, performing all over South Africa. Saudiq became well known for his fiery Flamenco touch. In 1992 he started his own Flamenco Guitar School to promote Flamenco Guitar playing amongst local enthusiasts. Great guitarists like Paco de Lucia, Rafael Riqueni and Vicente Amigo provided Saudiq with inspiration to compose his own pieces which appear on his albums“ Pure Soul & Madiah “.

His Gipsy King Concert at the Baxter Concert Hall was packed out and the album Granasturias with Classical Guitarist James Grace, was a great success when it was launched at theatres in Durban, Gauteng and Cape Town. The production, Highly Strung, directed by Khan in August 2005 as well as the very successful “ World in a Guitar “ included 8 fretboard virtuoso’s from around South Africa featured a fusion of Local South African Music, Jazz, Classical, African and Flamenco Guitar well as Original compositions.

Saudiq is presently one of the Solo Concert Flamenco Guitarist in South Africa that collaborates with other guitar genres and performs with top players such as Jimmy Dludlu, James Grace, Antonio Forcione toname but a few, and keeping this very unique art form of flamenco active for the next generation to come. Saudiq has performed on the 2014 International Jazz Festival with Jimmy Dludlu, Alvin Dyers and Richard Ceasar.

Saudiq Khan has also been nominated in 2013 as the Flamenco Guitar Ambassador for Jose Ramirez, the Guitar Luthiers in Spain, Madrid for Africa and the Middle East. Saudiq was accepted in 2014 to spend 45 days with one of the greatest flamenco guitarist Rafael Riqeuni in the Mountains of Cortegana, Spain doing master classes.
Saudiq is currently busy with his 3rd album.