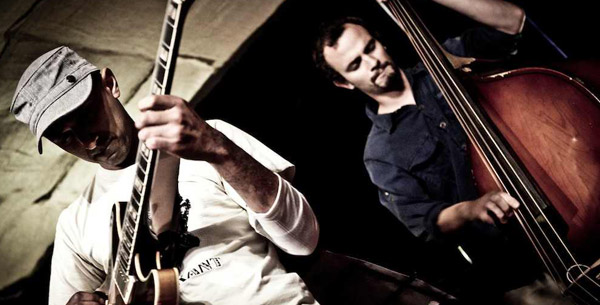 Described by the press as being associated with phrases like “genre defining guitar improvisations”, Reza Khota is a guitarist who has an eclectic background having played in the rock, classical and jazz scene and collaborated with some of South Africa’s finest musicians. Based in Cape Town, Khota has been part of groups at the forefront of the new jazz sound in South Africa including Babu, the Shane Cooper Quintet and Kesivan and the Lights and his own quartet. He has also collaborated with pianist Jill Richards in contemporary avant-garde ensembles playing music by Francois Sarhan for works by celebrated South African artist William Kentridge, and more recently with world renowned sound artist Francisco Lopez. Reza recently undertook an artist residency in Switzerland collaborating with the Swiss guitarist and composer Beat Keller. The guitar duo recorded a work by Christian Wolff entitled Microexercises which is released on the Wandelweiser label. They also toured Norway and Switzerland performing this music as part of the Edge of Wrong Festival.

Reza launched in 2014 Transmutation – his debut CD as a bandleader of the Reza Khota Quartet. Consisting of eight instrumental pieces, four of which are his own, one by bassist Shane Cooper as well interpretations of music by John McLaughlin, Jimi Hendrix and Bela Bartok. The album was self-produced and is being released independently. Currently Reza is an artist in residence at the Centre for Humanities Research at the University of the Western Cape. He is working on collaborations with fine artist Dathini Mzayiya, as well as with musicians like Claude Cozens and Brydon Bolton on a more free jazz and groove outing, and with with guitar maestro Derek Gripper on his Malian guitar explorations. Recently he has been playing with the legendary Louis Moholo and UK saxophone extraordinaire Shabaka Hutchings, and will perform in April at Edge of Wrong festival with SA/Swiss/ Norwegian trio Gunfire Orchestra.

About the other members on his quartet, Reza says he is blessed: “Buddy [Wells: Sax] has been on the scene since I was in my teens. I used to go listen to him play at the original Bassline club in Melville. He always blew me away. He is a great spirit and has a unique sound. He is fully grounded in the musical languages of this country as well as the Jazz tradition. Buddy is also an outspoken activist on inequality in our society. He, like many of us, has realised that if the gap between the rich and poor remains so vast, we will not alleviate our social problems. Shane [Cooper: Bass] and I go back almost 10 years now since I moved to Cape Town from Johannesburg. He is already a name that brings excitement to people’s faces. A formidable bass player, a mature artist and an adventures exponent of electronic music. I have had some of the greatest musical experiences playing alongside him. Jonno [Sweetman: Drums] has worked his way up to being one of the most sought after drummers on the jazz scene and now also the blues scene. He plays drums melodically, has an impeccable sense of tone and dynamics while still possessing the energy to set the stage on fire when it’s called for.”