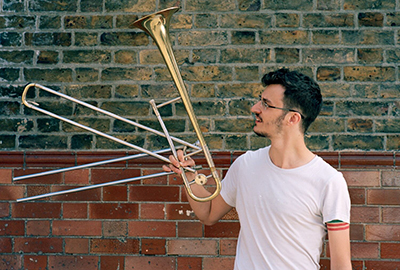 Raph Clarkson is a trombonist, improviser, composer and educator, born and bred in London. After studying music at the Universities of York and Oxford, he has developed an eclectic musical career, which spans trad jazz, contemporary jazz, avant-garde improvised music, theatre and performance art, contemporary classical music, ska/reggae, South African township jazz, and salsa. He is best known as the trombonist for the award-winning jazz-punk ensemble WorldService Project, which has seen him tour Europe, China and the USA, performing at the London, Tampere, Tokyo and Umea Jazz festivals amongst many others; the band represented the UK as 12 Points Festival ‘Plus’ artists. WSP have also been heavily involved with the Match&Fuse european exchange and touring network, collaborating with artists from across the continent.

Match&Fuse also represents Raph’s passion for educating; he has designed and delivered a number of projects in schools in the UK and abroad for M&F, is a co-founder of the Be Creative Music organisation, and recently held a place on the prestigious Spitalfields Music Leader Traineeship. More recently he has been involved in educational work curated by English Touring Opera (ETO), English National Opera, Opera Holland Park and the London Philharmonic Orchestra, and has this year been leading projects for Creative Futures, London Music Masters, Kazzum, Spitalfields Music, Sinfonia Viva, Mid Wales Music Trust, and Share Music Southwest.

Raph has developed a compositional and improvisational interest in the intersection between the trombone and the voice, and is exploring this with his ensemble The Dissolute Society, for which he writes words and music; the ensemble will soon release their debut album ‘Soldiering On’ (Babel Label, May 2018) featuring piano virtuoso Huw Warren as a guest, described as “wild…fearless…thrilling” (birdistheworm blog). They have also been involved in community and participation work, with Raph leading SEN workshops in London schools, and creative sessions at the St. Mary’s Hospital paediatric unit.

Upcoming/current projects include: touring with the free-improvising Speckles Brass ensemble, which Raph co-founded; regular performances with Brassroots; performing with the Engines Orchestra and their collaboration with guitarist Femi Temowo; commissions to write music for children’s voices and orchestra, for Sinfonia Viva; creating new music for Equal Spirits and workshop projects for a residency in South Africa supported by the Help Musicians ‘Emerging Excellence’ strand; and international touring of WorldService Project’s forthcoming album ‘Serve’, in 2018.

“Raph Clarkson is one of the rising stars of the U.K. improv scene” – bandcamp.comwww.raphclarkson.com