Downbeat Magazine – February 2018
“Featuring Live Music nearly every night of the week, The Orbit is a welcoming, regional Jazz spot. The owners have been presenting jazz in the area for more than a decade”
Read More

8 Coolest Things to Do in Johannesburg Now

Jetsetter – 27 November 2017
While all eyes are on Cape Town and the splashy new Zeitz Museum Of Contemporary Art Africa, Johannesburg, the city’s gritty, sprawling big sister, has a newfound sophistication that might surprise you. Here are our top things to do in Joburg now.
Read More

JHB Live – October 2017
JHBLive list of places that not only offer a good meal, but that can unexpectedly turn into a bloody good time.
Read More

In Your Pocket – 27 July 2017
Braamfontein’s The Orbit Jazz Club and Bistro is a Joburg institution, having built a reputation as a home for local jazz music lovers and Joburg visitors in search of South African sounds.
Read More

Downbeat  Magazine – February 2017
“Featuring Live Music nearly every night of the week, The Orbit is a welcoming, regional Jazz spot. The owners have been presenting jazz in the area for more than a decade”
Read More

Progenitors roaming in the NEWS realms

Consciousness – 14th February 2017 | by Xolani Mthombeni
Artistry is a faculty that requires dexterity and variables, that will perfect and extend its complexity. During the continuous harnessing, finding a path….
Read More

Estelle Kokot: Looking for her own voice – Jazzaholic

Artslink.co.za – 9th September 2016 | by Don Albert
Tired of just singing the standards and having backing musicians, she delivered a lesson in taking such songs as “I’m Beginning to See the Light”, “Both Sides Now” and “Honeysuckle Rose” among others…
Read More

Science and Cocktails with Jazz Johannesburg

Africa business website of KLM/AirFrance | February 2016
Listening to a scientific lecture in an ambient-lit nightclub while drinking a cocktail. In South Africa they do it.
Read More

Ufrieda Ho | 02 March, 2016 –Times
Science isn’t all stuffy and inaccessible all of the time, sometimes it can be uncomplicated, fun even.
Read More

Published on Feb 29, 2016
The music industry is taking a bashing and many artists are seeing their revenues and opportunities decline – an especially sad state of affairs in South Africa where the struggle for freedom was driven by the arts.
Read More

Jazz It Up At The Orbit

Joburg.co.za  – 23rd of February 2016
I don’t know why it took me so long to get myself to The Orbit but now that I’ve finally been, I’m kicking myself for not going sooner!
Read More

The Orbit Featured by Downbeat Magazine

Something to Shout about

Orbit Jazz Club: A place for all to play

The Orbit does it again

By JazzE Magazine – April 14, 2015
By Etienne Shardlow
The Orbit is Johannesburg’s newest jazz club, it opened its doors in March 2014…
Read More

Jazz is Without Borders

The Orbit hits the right note

The Orbit – Home of Jazz

What it takes to open a Jazz Club In Joburg

Nightlife : For those sleepless night The Orbit – Music without borders From Alexia Leitich

All you need to know about The Orbit jazz club

Jazz spun into an ideal orbit

Jazz Club holds fundraiser for the family of striking mineworkers

A taste of Portuguese Jazz

Jazz: The Crypt & The Orbit

The Orbit – A new hangout for Joburg Jazz Lovers


Jazz: The Pulse of the City

Two nights at The orbit

Bringing Jazz back to Jozi


The Orbit makes space for Jazz in Joburg


Jazz: The Orbit promises to be a treat for Joburg Jazz lovers 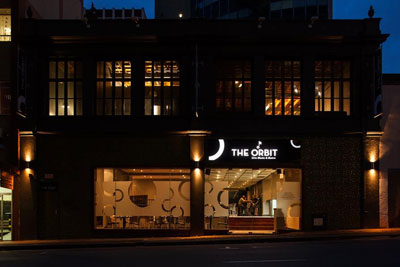 The Orbit: Jazzing up Joburg

Despite a rich jazz heritage, Joburg has seen much-loved clubs shutting down across the city over the last decade. Musicians, aficionados and visitors to Joburg have spent years searching for one-off performances and relying on annual festivals.

Now, finally, The Orbit offers a permanent space where Joburg’s jazz community can be sure of the highest quality live music, warm hospitality, fresh bistro food (and free Wi-fi), Tuesday to Sunday from 11.30 am each day until the music ends. The club will provide a stage for South Africa’s established and up-coming musicians as well as visiting international stars, to jam, collaborate and play special one–off shows.

Aymeric Péguillan Manager and MD of The Orbit says the ethos is simple, “the music and the vibe are everything and the musicians are the real VIPs, so we’ve spent a lot of time listening to what they think makes a great jazz club. The vision is to fuse the spirit of legendary Jozi clubs like Kippie’s and Bassline, with places like the New Morning in Paris, the Blue Note in New York and the Jazz Café and Ronnie Scott’s in London.

“The name comes from a 1958 Clark Terry album ‘In Orbit’,” explains Péguillan, “because it’s the creative high of live jazz that will make the atmosphere in an intimate spot like The Orbit absolutely electric. We humbly invite lovers of the life of jazz to help create a new home, where the art form is respected and legendary nights can happen”.

The March / April 2014 launch programme features among others the Feya Faku Quintet, Estelle Kokott and the Uhadi project lead by Sibongile Khumalo, as well as live Salsa, blues, Afrobeat and the all new Orbit Big Band.

With two stages split over a two level converted warehouse in the Braamfontein District, the club is part of the next wave of the city’s creative revival, surrounded by a daytime scene of coffee shops, record stores and start-up businesses web and by a bustling nightlife of hotels, restaurants and other clubs.

Back to Péguillan. “The Orbit will be 100% behind talented young South African musicians”, he enthuses, “the next generation of South African jazz greats will have a stage to hone their craft and learn from the stage veterans.”

Lunchtime gigs for up to 100 guests will be hosted downstairs with students from jazz schools invited to play. The project has been worked in conjunction with the Wits Jazz studies department.

Evening performances will play to up to 200 seated guests on the main stage upstairs which has a permanent grand piano (Yamaha C3) and back line, part of the club’s meticulous approach to sound design to ensure the best live and recorded sound. Toms Music is the main partner of The Orbit and has secured a quality backline and sound system for the club.

Péguillan had long dreamed of creating a home for jazz in the city, having run Peg’s Cosy Corner, a tight little jazz club in Troyeville between 2000 and 2002. Together with fellow owners Dan Sermand and Kevin Naidoo, the team has considered every detail, to ensure that musicians have the perfect space to perform in and guests can relax and enjoy the hospitality, with the freshest bistro food and the finest wines and liquors served by attentive staff.

Sermand, who splits his time between Joburg and another great jazz capital, Stockholm in Sweden, is Executive Producer for musicians including Nils Landgren and Magnus Lindgren and worked with Quincy Jones to stage the ‘Quincy Jones Celebration’ at the annual Ystad Sweden Jazz Festival in 2012.

Sermand says, “We’re jazz fanatics who’ve lived in Joburg and hung out in some of the world’s great clubs, so we are passionate about creating a home the South African jazz movement deserves”.

Memberships will soon be available offering a range of benefits to loyal lovers of jazz.