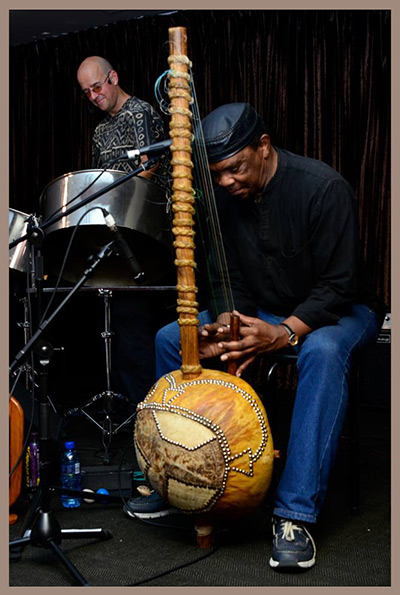 Dave Reynolds and Pops Mohamed have traveled the world and performed over 150 concerts together. Their show on the main stage at the Standard Bank Jazz Festival last year was recorded and will soon be released as a live album, “Live in Grahamstown”.
For the first time at The Orbit they will be playing with Nigerian born bassman, Amaeshi Iketchi (often seen with Steve Dyer, Zonke and others) and drummer Bethuel Mbonani (known for his work with the late Xoli Nkosi and others).
Dave is SA’s leading steelpan player, a SAMRO Award winning composer and acoustic guitarist. He’s performed and recorded all over the world with Steve Newman, Hugh Masekela, Gloria Bosman, Tony Cox, the late Sipho Gumede, Paul Hanmer and McCoy Mrubata to name a few. His latest album “The Light of Day” was nominated for a SAMA and he recently did a TED talk about how music allows us to transcend circumstance.
Pops is SA’s leading indigenous-contemporary-crossover artist. A multi-instrumentalist, he plays kora (African harp), mbira (thumb piano), Khoisan Bow, and various percussion effects. He has won awards such as the ACT Lifetime Achievers, hosted a TV show called “Southern Rhythms”, recorded and made movies with the Khoisan people in the Kalahari, and toured globally with the likes of Andreas Vollenweider and Baaba Maal.