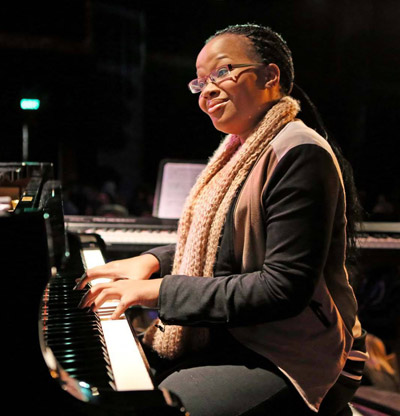 Phuti Sepuru (26) completed her honours in Bachelor of Music at the University of Pretoria in 2011, majoring in Jazz Piano Performance, Music Education, and Music Technology. She went on to complete her Master’s degree in Musicology in June 2015 at the University of Pretoria, where she is employed as a jazz vocal accompanist, and as a lecturer in world music, research methodology, jazz history, and jazz chamber music. She also serves as a research supervisor for final year/honours students.

She started playing recorder at the age of 6, and made the transition to classical piano at the age of 10, then went on to major in music at The National School of the Arts where she was the top classical music student. She has worked with artists such as Ebony, Duvha, Keke, Sizwe Mashinini, Basadi Women of Jazz, Franco Prinsloo, Simply 4, Ntombi Ngcobo, and Bheki Nqoko, while also having performed internationally in countries such as Vietnam, Malaysia, Japan, Indonesia, Sweden, Denmark, Ruwanda, Zambia, and Egypt, among others. During 2011 she was also afforded the opportunity to perform in New Zealand as a representative of South Africa at various rugby world cup events.

More recently, she was selected as the pianist for the Standard Bank National Youth Jazz Band for 2015.