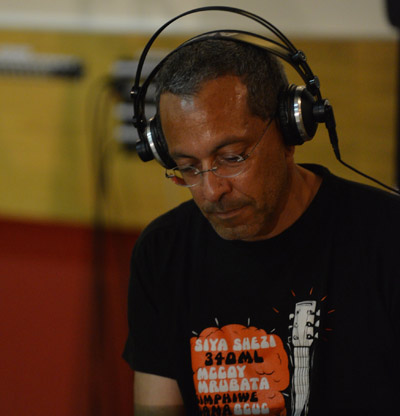 Born in Cape Town in 1961, Paul Hanmer began classical piano and theory lessons in 1970. After a brief period as a student at the University of Cape Town, Hanmer left to work with guitarist Paul Petersen.
In 1987 Hanmer moved to Johannesburg where he was influenced by bands such as Sakhile and Bayete. Later Hanmer formed Unofficial Language with Ian Herman (percussion and drums) and Peter Sklair (electric bass). The trio recorded their first album “Primal Steps” in 1994 and a second album, “Move Moves” in 1996.
Hanmer’s first album as a bandleader, “Trains to Taung” was released in 1997 to critical acclaim. Since then he has recorded five more albums:

“The Essential Paul Hanmer” (2008) is a compilation of the above-mentioned albums.
Hanmer has recorded with Tananas, Miriam Makeba, Ray Phiri, McCoy Mrubata and Pops Mohamed and formed part of Tony Cox’s ‘Cool Friction Band’. In 1999 he performed and recorded with Sheer All Stars, and produced Gloria Bosman’s debut album, “Tranquility”.
Hanmer has also written a string quartet for the Sontonga Quartet and a Clarinet quintet for Robert Pickup (Zurich Opera). In addition he has composed a suite of duets for double bass and cello for Leon Bosch (Academy of St Martin’s in the Fields).