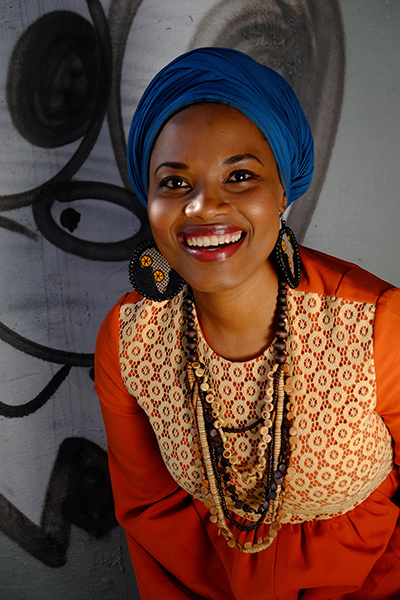 Omagugu, who hails from KwaZulu Natal, brings a new sound with her unique voice; just what Africa has been waiting for.

Her debut album, “Uthingo LweNkosazana”, features beautiful intertwining textures of rhythm, space, melody and harmony that explode into a rainbow of musical colours rippling from within to transport you into a spiritual journey. Omagugu, singer, songwriter, lyricist, vocal coach and choir conductor, was born in KwaZulu Natal in a small town called Nquthu, the neighbouring town of the historical battle eld of Isandlwana. Omagugu’s love for music began in boarding school where she enjoyed singing in the school choir, and was inspired by her mother as they sang together in the church choir. Omagugu would listen to her mother’s musical collection of Afro jazz and country music late every Sunday night, when the rest of her family had fallen asleep. She would dream of a new world where she would perform and lift people’s spirits through her singing and storytelling.

When her family moved to Durban, and after she had matriculated, Omagugu en- rolled at the Durban Institute of Technology where she majored in jazz vocals and then went on to further her studies at Tshwane University of Technology where she completed her Bachelor’s Degree in Music. The highlight of her sec- ond year of study was being invited by the late great Bheki Mseleku to perform one of his famous compositions, “Through the Years”, which he had recorded with the extraordinary jazz vocalist Abbey Lincoln on his album, TIMELESSNESS. Omagugu had the privilege of meeting mama Busi Mhlongo while she rehearsed at the Music Department where she was studying. Omagugu was inspired by Busi Mhlongo’s humility and general respect for every person she met. Her gen- tle nature was the complete opposite to her powerful vocal prowess and stage presence.

Omagugu is not only a singer and songwriter, she has a love for children and a passion for teaching. She started teaching jazz vocals and history of music part time at The Bat Centre whilst studying music in Durban. Later, when she moved to Johannesburg to complete her Bachelor’s Degree in music, she taught jazz vocals and music theory part time at Central Johannesburg College. After completing her studies she taught contemporary singing and performance at The National School of Arts. Omagugu is currently based in East London, Eastern Cape, where she teaches music and conducts three choirs at Stirling Primary School. She is also a part time lecturer at Fort Hare University, where she teaches jazz vocals, performance and conducts the jazz vocal en- semble. Inspired by amongst others, Busi Mhlongo, Princess Magogo, Abbey Lincoln, Billy Holiday, Ella Fitzgerald, Cassandra Wilson, Oumou Sangare, Eriykah Badu, Jill Scott, Themba, Mkhize, Bheki Mseleku. Omagugu’s wide experience has in uenced her style and the extraordinary musicality of her work.