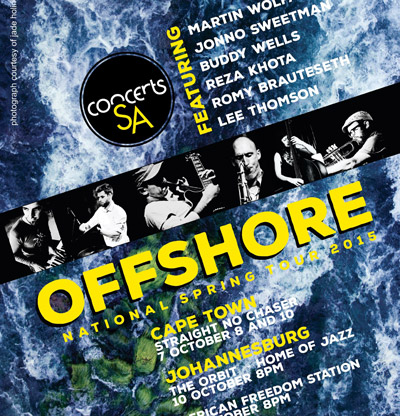 A decade back a serendipitous meeting of three music lovers took place in a tiny forestry village in the mystical part of South Africa famously associated with Dalene Matthee’s “Kringe in ‘n Bos”. Two surfer boys and aspirant musicians from Knysna, Jonno Sweetman and Paul Gibbings, found an unlikely musical soulmate in ex-physicist, ex-financial market slut, ex-zen monk, ever-pianist Martin Wolfaardt. There ensued years of regular musical meetings – listening to the great jazz recordings, from Coltrane to ECM to Zim Ngqawana and then expressing the joy of inspiration in clumsy but ecstatic improvisation and eventually in the recording of a debut CD – “Too Many Names” (taking inspiration from the Chilean master-poet Pablo Neruda).


Refining their grasp of the language of jazz through regular Garden Route gigs “Offshore”, as the trio was aptly christened, reached the ears of more sophisticated musicians including Buddy Wells and Jonathan Crossley. Collaboration with the latter led to the recording of “Funk for the Shaolin Monk” as the Jonathan Crossley Electric Band. The extraordinary, iconoclastic Buddy Wells joined Offshore and along with Crossley and brilliant perennial collaborator Marcus Wyatt, Offshore released “Incident” in 2008.


On the strength of that critically acclaimed CD Offshore was invited to play the Cape Town Jazz Festival and the Standard Bank Jazz Festival in 2009, where they were welcomed with a standing ovation and rave reviews.

It didn’t take long for drummer Jonno Sweetman’s remarkable sensitivity, musicality and groove to turn heads in Cape Town. He and Gibbings moved to the Mother City in 2010 – “The Garden Route’s Loss is Cape Town’s Gain” wrote Evan Milton in a piece on Offshore published in the Weekend Argus at that time. Since then Offshore has maintained a gentle evolution, with Wolfaardt emerging from the Knysna forest periodically bringing new compositional ideas and a child-like joy in the playful act of co-extemporisation.


That has partially manifested in the addition of several extraordinary musicians to Offshore’s flexible line-up. Reza Khota first heard Offshore when the group shared a bill with the seminal “Babu” in 2010. His powerfully emotive, modern sound was an instant match and has broadened the group’s sonic pallet to allow the underlying rock and pop influences to emerge more clearly. Lee Thomson brings his beautiful tone on trumpet and flugelhorn along with a restless creativity and refreshing disregard for genre restrictions. Romy Brauteseth replaces UK-based Gibbings on contrabass and injects the youthful intensity, authenticity and musicality that has made her one of the most sought-after bass players in the country.

The Offshore live experience has little to do with any particular musical trend or artistic narrative. Each performance is, essentially, an act of worship. Not submission to some constructed deity – but rather an act of complete immersion in the profound mystery that is the moment of creation. Says Wolfaardt: “my favourite compliment is when an audience member – visibly moved by the music – approaches me after a gig and explains, half apologetically, how little they like jazz.”