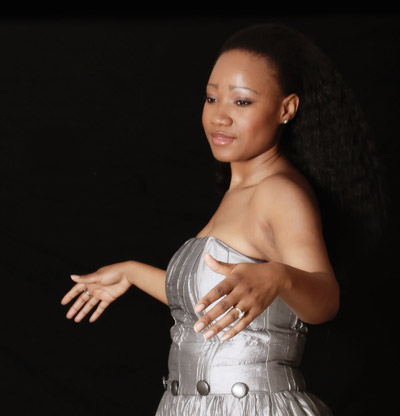 Jazz / Afro-Soul / Soul Songstress, NOXOLO HLATSHWAYO, was born in the Mother City (Gugulethu, Cape Town). She knew from a very tender age that singing was what she was destined to do as her love for music began when she was 4 years old. She participated and sang in all choirs she could find, at Primary School, at Church, in the Community as well as at Tertiary. She thrived throughout all this singing and she continued nourishing her soul with song until she got her break in 1998.
That year, in the heart of Johannesburg, her dream of entering the music industry became a reality when STEVE KEKANA featured her in his “Tsepo Yaka” Album and they did a duet together.

From 2003 to 2007, she worked very closely with BENJAMIN DUBE honing her own skills and eventually collaborated with him on live performances.

Then from 2007 to 2008, she again worked very closely with VUYO MOKOENA and her work with him gave her recognition in the industry.

In 2008 she was included as a backing Artist for REBECCA MALOPE, LUSANDA, and DEBORAH FRAZER at the South African Music Awards.

Between 2008 and 2009, she was a co-Presenter with Kekeletso Phoofo on the DSTV “In His Presence” show. In 2009 she also had the wonderful opportunity of working with ZAMAJOBE.
Later in 2010 she was featured in Giggs Superstar’s Album “Deep House Chronicles 4”, she wrote and sang two tracks, “This is it!” & “Ilanga” which are produced by Ladi, Paul, Mercy, Mphoza and Giggs Superstar.

In 2011, NOXOLO went solo and released her debut Album, ISINGQI on which she had been working since 2009, it is a 12 track CD for which she was the Executive Producer. She financed the whole project by herself.