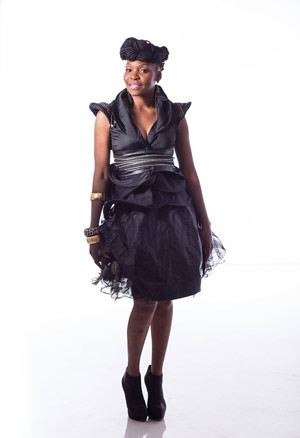 A star-studded affair marked the launching of Nnunu Ramogotsi’s debut album. The event was held at Gaborone International Convention Centre (GICC) where some of Botswana’s musical luminaries such as Eugene Jackson, T.H.A.B.O, Dig Nash and Shanti Lo were in the audience.
The Afro jazz singer plans on releasing her first solo album end of May 2012. The album is entitled ‘Mmasonoko,’ which loosely translates into meaning a woman.
According to Assistant Minister of Health, Gaotlhaetsi Matlhabaphiri this event and evening help to symbolises Botswana artists musical development to international standards.
“Not only is this night a monumental occasion but also a time to recognize Nnunu as a symbol of pride for Botswana,” added Matlhabaphiri.
Nnunu is a young, Catholic lady born in Ramotswa in 1977. Her singing talents were first discovered in church when she started singing at a tender age. Her love from singing sprang from a devoted mother with a passion for singing nurtured at church.
“This moment for Nnunu culminates from hard work. Our business is music but at the moment it is low however we do music because we love music,” said Botswana Music Union President, Otsile Ramorwa.
Her career in music started when she was discovered by Puso Phetwe who led her to the then Director and conductor of KTM Choir, Gomolemo Motswaledi who introduced her to the industry while she worked at BIAC where she was a conductor of the PMS choir for 4 years.
Upon identifying her musical capabilities Gomolemo Motswaledi introduced her to the late Duncan Senyatso where she apprenticed as a backing vocalist and this encounter opened doors to advance her musical career as she went on to sing with the likes of Ndingo Jowha, Lister Boleseng, Punah Gabasiane, Shanti-lo, and Banjo Mosele.
Nnunu’s career grew from strength to strength as she progressed to sing with Lekofi Senyeso as a cabaret singer in Grand Palm. Her musical achievements enabled her to perform in corporate events such as Phakalane Golf Estate Christmas Shows, Barclays Bank logo launch, Stanbic Bank awards ceremony, Debswana, Bihlic Sure logo launch and Cresta President Hotel Valentines event to highlight some of the milestones in her bludgeoning music career.
Nnunu is also a member of Women of Jazz Botswana, a trio group that comprises of Punah Gabasiane and Kearoma Rantao, which has contributed musically in flying Botswana’s flag high. The group has raised funds for Childline, Gender Links and are now building a house for a destitute in need in Ramotswa, as an initiative to make a difference in people’s lives through music.