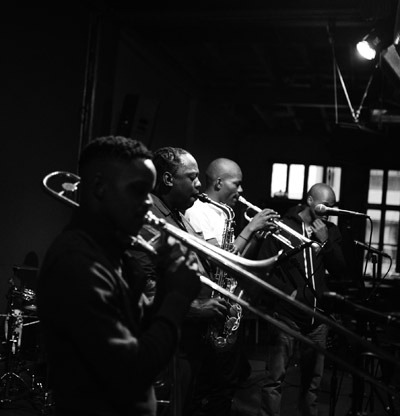 Tshepo Tsotetsi is a young music student who was born from a little town called Benoni, who is currently studying at the University of Pretoria. His musical journey began when he was in the seventh grade; he was overwhelmed upon his first encounter with a church brass band in Katlehong.

It was in this very brass band that he was taught how to play the trumpet, alto horn, euphonium, trombone and tuba. He also took weekly music classes at his primary school and started playing the recorder. His parents acknowledged his passion for music and a year later they enrolled him at the East Rand School of the arts and later the National School of the Arts (NSA) a year later. While at the NSA he played with various ensembles in Johannesburg including the NSA Orchestra, Johannesburg youth orchestra, Johannesburg symphonic wind band, South African National Youth Orchestra (SANYO), Johannesburg Philharmonic Academy Orchestra, South African Youth Symphonic wind band. He and his schoolmates initiated a new ensemble called the Oracles of Variety.

Tshepo has always had a keen interest in composition and arranging from a young age and it is with this newly formed ensemble that he could really try out any new compositions that he had and these were also played during the gigs that the ensemble would attend. In the ninth grade, the National School of the Arts orchestra played his first orchestral composition that also awarded him an opportunity to put together a twelve-piece orchestra to perform at the presidential inaugural awards. After his first encounter as a director of a young orchestra he did not want to turn back. In 2008 he went on tour with the Global Harmony international to Japan for a six weeks cultural exchange where one of his compositions was included in the album that was pre-recorded for the tour. Upon his return to South Africa he appeared as a soloist with the Johannesburg Philharmonic Orchestra and the same year he was invited to perform with local artists Nhlanhla Nciza, Rebecca Malope and Rae.

He continued performing with performing artists around the country and continued composing. Then founded the New Skool Orchestra, a vibrant group of young musicians that bring forth a story of a liberated South African generation. He appeared as a composer as well as soloist in 2011 with the University of Pretoria Symphony Orchestra with his composition called Flowers and Rainbowsí. He had the privilege of collaborating with Christian Muthspiel on their Out of South Africa.

Bongani Nkaone is a trumpet player born and bred in Atteridgeville, Pretoria. He started playing trumpet at the age of 9 with a local church brass brand, and later in high school when he was in grade 10 he stated his music grades with UNISA.
Since then he has been playing professionally with artists like Themba Mkhize and Zonke.
He has been involved in a number of numerous bands as a side man. He toured Spain with New Skool under the leadership of Tshepo Tsotetsi . He also toured with a musical “Mama Africa Sings” in Holland for 3 months . And he currently plays trumpet for Miagi New Skool Orchestra.

Thabang Sithole was born in Atteridgeville in the West of Pretoria and grew up there. He started his music education at STTEP music school 2006-2008 in trombone playing. In 2007 was accepted in the MIAGI youth orchestra, and still am a member of the orchestra to date.
Currently he plays bass and tenor trombone player in the MIAGI New Skool Orchestra, New Skool Sextet, Gauteng Camerata and has been invited to play with the likes of Themba Mkize, Pretty Yende and other orchestras around South Africa.

Pule Mpeke’s experience ranges from being a full time drummer, both full time and part time music director, music teacher, vocal arrangements and recording with some of the well known musicians in South Africa.
He then worked as a drummer and Music Director for a church called House of Joy in Klerksdorp (Matlosana) 2006-2008. In the same duration played for Living Waters ministries CD launch, recorded percussions, drums and vocals on the same church choir’s album. After matriculating in 2007, he enrolled at Ochrim School of music where he obtained a National Certificate in music. While busy with my schooling; then worked at Oasis Church in Sandton as a drum teacher and drummer, moved to Doxa Deo ICC where he served as a drummer for over a year under the leadership of Malape Motloung.

In 2009 he enrolled at Tshwane University of Technology for a National diploma in jazz and popular music. In January 2010 he started working as a drummer at Tower of Grace in Pretoria where he’s currently employed. He was also part of a production called Ubuhle Bo’Mzansi that went to the Grahamstown annual Arts Festival.
He has since recorded gospel albums with a number of artists like Duhva, Maria and Keke Phofoolo just to mention a few. 2011 he started working for Pathsela music as fulltime drummer for afro-soul singer Siphokazi. In the same year he was appointed as music director for gospel contemporary group Soul’D and started work with an orchestra called New Skool Orchestra.

In the year 2012 he did pre-production album work for Sbu Banda and recorded Mandla’s live cd/dvd recording, he has been part of a theatre production called Spring Awakening under the direction of American director Dr Harold Mortimer. He worked with Bongi and Collin, Mahalia Buchanun, Bukiwe, Dudu Tsaobane, William Sejake and Spaxin Entertainment as a full time drummer. In this very same year he worked with Gloria Bosman on some of her live performance works. He was also part of gospel contemporary artist Mabongi’s cd launch, he has just recently recorded Pule Makona’s album. Most recent achievement was when he headed a team that organized a successful worship event at Doxa Deo ICC as a music director. He had the privilege of performing with Jaziel Brothers at the 2012 South African Choral Music Awards (SACMA’S).

He had the opportunity to work with a young gospel group called 3D Sanctified from Witbank as a sequence controller.
In the beginning of 2013 he recorded two albums, a traditional gospel album with Godfrey from Tshwane Gospel Choir, and Shota Mdabe’s album ( Shota Unplugged) both produced by Lebohang Morolo from Leblords productions
During the month of March 2013 he was elected as part of a band to represent South Africa in Spain under the leadership of Tshepo Tsotetsi (New Skool Ochestra). He has recently also started working with Swaziland´s Afro traditional singer Nomalungelo.
Some of the other artists he has worked with include Concord Nkabinde, Dr Chats Deverop, Roland Moses and Kevin Davidson.

He’s currently in Gauteng Pretoria studying music at TUT and is a private tutor, he is also currently the Head Producer in a Multi Media company called Apple Soul Productions, which is doing well in producing, song writing and many other aspects it deals with. Musa is apart of a great Orchestra MIAGI which has a given him a opportunity to go and give a workshop on South African Jazz music in Germany in 2012. He also has worked with a multiple artists, both known and unknown.

Sibusiso Sibanyoni from Witbank, Mpumalanga, became interested in music at a very early stage. At the age of 10, Sibusiso was already playing drums in the main church service. His love for the bass guitar grew when he was given an acoustic guitar and turned it into a bass guitar. Later he started meeting other fellow musicians from around his hometown and started doing regular gigs. After matric, he moved to Pretoria to further his studies in Business management. A year later, he then moved on to study music, the subject he was really most passionate about. It was during this time that Sibusiso started to work professionally in the music industry. He got exposed to the real world in the arts and culture.

To date, he has shared the stage with many well know artists in the music industry such as Mrs Sibongile Khumalo, APPLE SOUL, Ayanda Khumalo, Mnqobi Shota Mdabe, NOMALUNGELO, Mimi Ntenjwa, KARABO Unconventional Sol, Judith Sephuma, Mahalia Buchanan, William Sejake – Tshwane Gospel Choir, Phila, Sbu Banda, Jaziel brothers, Phutuma, Wanda baloyi, NEW LIGHT, Witbank extravaganza and many more. Sibusiso is very passionate about starting new projects and working with people who are unknown and are destined for greatness. He believes in everyone he works with and always delivers his best at all times.