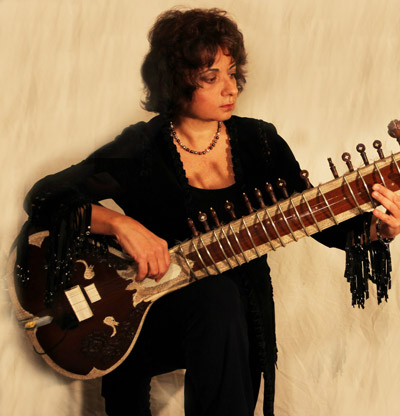 Nana Simopoulos is considered one of the foremost composers of world fusion music. She artfully blends sounds and textures from around the world. The late Indian sarangi master Ustad Sultan Khan accompanied her on her last two releases, After The Moon, 1997 and Daughters Of The Sun, 2001, which was #1 on the NAV New Age and World radio charts. “She has succeeded in blending the products of various cultures…” claims German press. In 1984, Nana’s first album Pandora’s Blues featuring bassist Charlie Haden and drummer Billy Higgins, won critic’s choice from DOWNBEAT Magazine. She later recorded two critically acclaimed releases on Germany’s Enja Records; Wings and Air in 1987 featuring bassist Charlie Haden, trumpeter Don Cherry and saxophonist Jim Pepper, Still Waters in 1989 with bassist Chip Jackson. In 1992 B&W Music released the beautiful Gaia’s Dream.

Nana’s performances include appearances with Oscar winner Tan Dun as a soloist on sitar in Marco Polo with the New York City Opera and the RAI Symphony Orchestra in Torino, Italy. She has also performed widely with her ensemble in venues such as the Montreux Music Festival and appears on their compilation CD Live at the B&W Montreux Music Festival, Vol. II. Her performance at the Warsaw Electronic Festival in October 2007 received remarkably high attendance. She performed at Symphony Space in the Wall-to-Wall Joni Mitchell event with Opera diva Lauren Flanigan and at the Kennedy Center during the Mary Lou Williams Women in Jazz festival with the Mary Ann McSweeney sextet. Her ensemble, World Music of Nana, performed at the Rubin Museum with Brazilian percussionist Café Da Silva and Merkin Hall with the late Ustad Sultan Khan on sarangi and David Liebman on saxophone. In September she conducted 40 musicians from Tibet, India, Turkey, Africa, Israel and Greece in a 9/11 Memorial Service at the Cathedral of St John the Divine in New York City in an original composition called I Will Remember You

In November of 2011 she composed and conducted music for LiquidBody Dance’s performance of Resonant Streams: An Ancient Call as part of the six-month art series on The Value of Water at thre Cathedral of St John the Divine.

She has written numerous commissions for dance companies such as Dance Theatre of Harlem with former Pilobolus choreographer Peter Pucci, the Joffrey Ballet, The American Dance Festival, Ballet Hispanico, North Carolina Dance Theater and choreographer Caryn Heilman, alumnus of the Paul Taylor Dance Company. Her composition “Vessel” was performed by the Westfield Symphony Orchestra in a concert with the Dance Theatre of Harlem in an event called Music In Motion. She has conducted and performed her original music with ensembles at the performances of Joyce theatre in New York, the Cathedral of St John the Divine, on Broadway and at the American Dance Festival in Durham, North Carolina.

Nana has also written scores for films such as the Domain of the Senses; Touch as well as scores for the theatrical productions of Antigone Through Time, presented at the New York City Fringe Festival and Conversations With the Goddesses, produced by Soho Repertory Theatre. She has written scores for two musicals, An Absolute Mystery, which premiered at La Mama, etc., and Matrix Maison, presented at Dixon place, New York City. She also wrote the music for the off Broadway show Studs Turkel’s American Dreams, Lost and Found, which toured the U.S. and opened at the Lucielle Lortel Theater in New York. During this time the Acting Company received a TONY award for excellence in theater. She is currently performing with her world jazz ensemble.